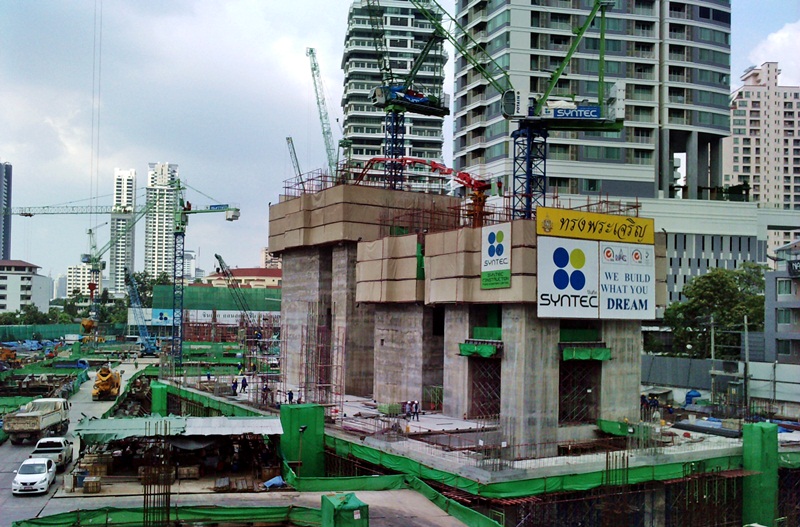 Inflation in 2012 is likely to stand at 3 percent, a decline from 3.9 percent registered in 2011. Private sector consumption is expected to grow by 5.6 percent because of the recovery of the production sector and better employment situation.

Private sector investment is likely to grow at a high rate of 16.1 percent, because more construction and purchase of machines were seen after the flood damage in late 2011. At the same time, entrepreneurs have expanded their production capacities to cope with domestic economic growth.

According to the Fiscal Policy Office’s forecast, public sector consumption in 2012 would grow by 6.7 percent, while public sector investment would expand by 8.5 percent. Exports are likely to decelerate because of impacts from the slowdown in the global economy and the eurozone debt crisis. Agricultural exports are expected to fall, as a result of the decline in rice exports.

As for outlook in 2013, the Fiscal Policy Office believed that public sector investment would grow by 14 percent. The Government’s investment of 350 billion baht under its long-term water management plan would be a supporting factor to spur the economy. Public sector consumption is expected to grow by 3.5 percent. The recovery of the world economy in 2013 would help boost Thai exports. Exports of products and services are likely to grow by 6.6 percent, while imports are expected to grow by 5.6 percent.

Private sector consumption in 2013 is likely to grow by 3.9 percent, while private sector investment would expand by 9.2 percent. Household income is expected to increase because of the Government’s economic stimulus measures, especially the implementation of the 300-baht minimum wage across the country and the rice-pledging scheme.

Inflation in 2013 could remain at 3 percent, since global oil prices are expected to decelerate because of more supply from the United States. However, natural disasters, such as floods and drought, might lead to higher prices of grains in the world market. As a result, production costs for animal feed would be higher, thus leading to higher costs of meat. The unemployment rate is likely to be at a low level, only 0.6 percent.

Meanwhile, the Deputy Prime Minister and Finance Minister, Kittiratt Na-Ranong, said that the Thai economy in 2013 would grow well and enjoy stability, with a growth rate of at least 5 percent. So there would be no need to introduce economic stimulus measures, except for measures to improve the people’s quality of life.

Thailand’s GDP to be higher than 4.6% next year

Methee Supapongse, senior director of the BoT Macroeconomic and Monetary Policy Department, said Thailand will encounter less internal and external risk impact while positive factors are expected in light of the government’s stimulus on domestic spending and private investment in infrastructure, and less volatile economic situation in the US and Europe.

Thailand will however have to closely monitor foreign currency inflow following the Japanese government’s economic easing and stimulus, he said.

He added that internal political conflict remains a delicate issue while the nationwide Bt300 daily minimum wage will slightly accelerate inflation rate. The fundamental inflation is predicted at 0.5-3 per cent which is within the framework set by the BoT.

Thailand’s overall economy had expanded in November due to increased private spending by 1.8 percent both in consumption and investment. Automotive and fuel spending has also been higher.

Private investment also saw a 1.8 percent growth in November in machinery and equipment sector while exports, totaling UD$19.3 billion, was 6.7 percent higher than in October.

November’s general inflation was reported at 2.74 percent while fundamental inflation was at 1.85 percent – a slowdown in accord with the prices of food and beverages, according to Mr Methee. (MCOT online news)