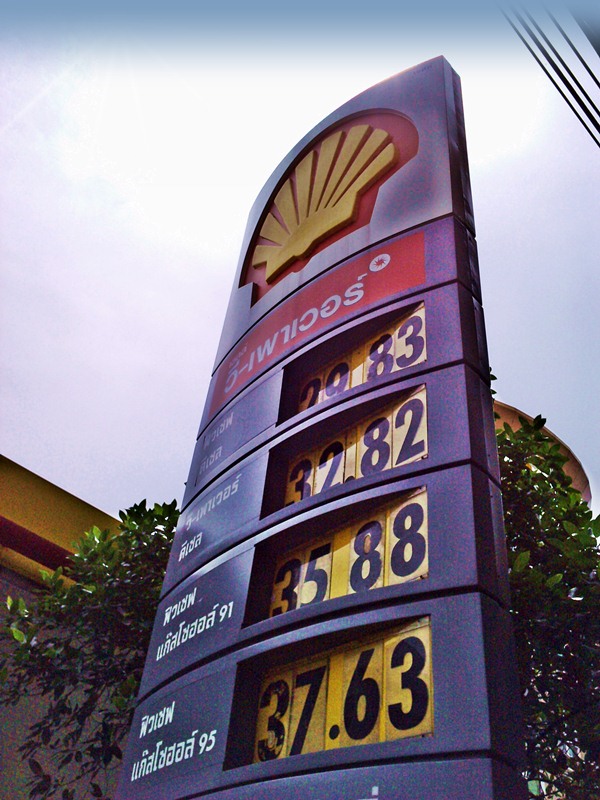 Thailand’s rocketing gas consumption has reached 4,800 million cu ft/day, leading the country to look for new fields of exploration and new foreign suppliers. Thailand has acquired exploration rights for two projects in oil fields that are partially shared with its eastern neighbour, which is believed to have hundreds of millions of barrels of oil in its vast undersea reserves.
However, boundary disputes have delayed drilling in one field, although talks are reportedly underway to resolve the disagreement and free up access to millions more barrels. Thailand needs to urgently negotiate with Cambodia to exploit oil and gas reserves affected by the disputed maritime boundary, or overlapping claims area (OCA), given its increasing domestic energy consumption, according to a senior Energy Ministry official.

Thailand’s subsidy on diesel currently costs the government THB9.52 billion or USD313.7 million) per month to keep the retail price of diesel below the threshold of THB30 per litre.

Asia is one of the more interesting gas markets in the world. Places like Thailand and its southeast Asian neighbors have seen phenomenal demand growth over the last several years. Songpope Polachan, director general of the Mineral Fuels Department, said natural gas in the Gulf of Thailand will be exhausted in the next five years and additional supply is necessary to cope with the rocketing consumption.

The Foreign Ministry is duty-bound to negotiate with Cambodia on the OCA, covering 26,000 sq km, to launch exploration and production of natural gas in the area for the benefit of both countries, he said.

Mr Songpope insisted that the OCA negotiation is unrelated to the Thai-Cambodian dispute on Phra Viharn (Preah Vihear) temple which is pending a ruling of the International Court of Justice.

If an agreement is reached, it will take at least 10 years before natural gas can be supplied, he said, adding that Thailand’s demand for natural gas has increased at least 5 per cent each year, mainly for electricity generating (62.6 per cent), industrial consumption (17.7 per cent), vehicles (5.2 per cent) and gas separation plants (13.9 per cent).

The Energy Ministry, he added, is negotiating for gas reserves from neighbouring countries including Myanmar.

“Thailand’s power demand will double in the next decade and concerns about climate change have been growing, making gas a more promising choice for the country,” he said.

Mr Asada, also global vice-president in specialties of Royal Dutch Shell, succeeded Pissawan Achanapornkul as head of Shell’s operation in Thailand since the beginning of this month. Mrs Pissawan was assigned to a new post in Britain. The company is celebrating 120 years in Thailand.

“The government policy for allowing the private sector to invest in LNG-related businesses in Thailand will determine greater use of gas,” Mr Asada said. But so far, only energy flagship PTT Plc has played a major role in gas trading.

A 20 years deal with Qatar to supply LNG for PTT

The agreement was signed by His Excellency Dr. Mohammed Bin Saleh Al-Sada, Minister of Energy and Industry and Chairman of the Board of Qatargas and Mr. Pailin Chuchottaworn, Chief Executive Officer and President of PTT.

Under the terms of the agreement, Qatargas 3 will deliver two million tonnes per annum (MTA) of LNG for a period of 20 years beginning from 2015. The agreement marks PTT’s first long-term LNG SPA.