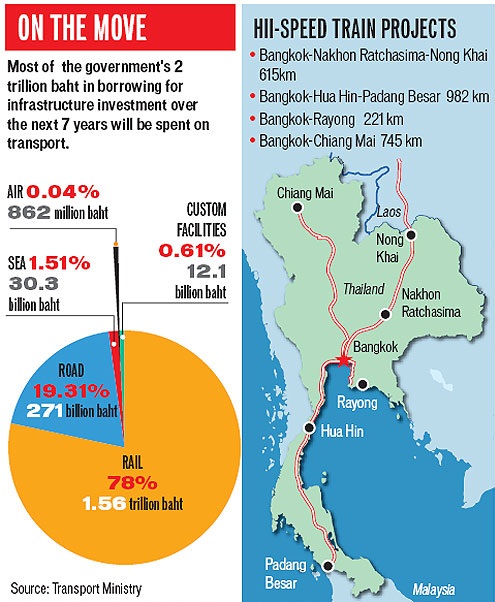 Thailand is booming again, but the foundations of its growth revival are wobbly. Unless policies and politics become more robust, the Southeast Asian nation’s economy may find its momentum hard to sustain.

While this year’s expected GDP growth rate of about 5 percent is close to the economy’s potential rate of expansion, the quality of growth is suspect. A subsidy for first-time car buyers saw a jump in auto loans last year. A 30 percent increase in unsecured personal lending prompted a recent warning from the Bank of Thailand about the growth of household debt.

Farmers, meanwhile, are getting a state-sponsored income boost. The government is buying their rice crop at above-market prices for a second year at an estimated annual fiscal cost of 1 percent of GDP. The spending priorities are lopsided. The construction of a $12 billion water management system, which could prevent the recurrence of 2011 floods, is unlikely to start this year.

says Prasarn Trairatvorakul, the central bank governor. The monetary authority chief is also mindful of the hard slog ahead in doubling per capita income to $10,000 a year, the minimum required for Thailand to become a rich nation.

Thailand has big investment plans for the next seven years, but this may drive public debt to the roof. Graphic: bangkokpost.com

Escaping its middle-income trap will be difficult because the country is running out of cheap labour. About 10 percent of the workforce consists of immigrants from Myanmar. More opportunities for them at home could mean higher costs for Thai companies, says Kampon Adireksombat, a TISCO Securities economist in Bangkok.

A 23 percent minimum-wage increase and a drought in the agricultural belt in the north and northeast could lift inflation this year above the central bank’s estimate of 2.8 percent.

The biggest risk for investors, though, is politics

In the 17 months that she has been in power, Prime Minister Yingluck Shinawatra has not pushed too hard for an amnesty for her brother and former prime minister, Thaksin Shinawatra, who was ousted in a 2006 military coup and is currently living in Dubai. But there is always a risk of a tactical mistake that will put pro-Thaksin “red shirts” and anti-Thaksin “yellow shirts” on a collision course. Unless Thai politics becomes more stable, the government will have little interest in boosting competitiveness and every incentive to carry on giving people a good time.

At a seminar on “Challenge for the Future of the Thai Economy in 2013” held by the Economic Reporters Association yesterday, former finance minister MR Pridiyathorn Devakula said two challenges were how to grow the Thai economy and how to keep the economy stable. To achieve both of these, the government has to pay more attention to the public debt.

Pridiyathorn said the current government was less concerned about fiscal discipline than populist policies to ensure voter support, and that could result in damage to the nation’s finances.

Before introduction of the rice-pledging programme, the public debt stood at Bt8.6 trillion. If the scheme is continued, the debt could reach Bt10.3 trillion, or 63.7 per cent of gross domestic product, by the end of September 2019, he predicted.