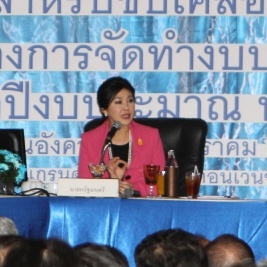 Prime Minister Yingluck Shinawatra today announced a package of national strategies to move the country forward for sustainable growth and readiness to be integrated into the Southeast Asian economic region.

She met with provincial governors and senior officials to confer the government’s policy and work on budget allocations for the 2014 fiscal year.

In a four-point strategy to herald Thailand’s arrival at a new era, Ms Yingluck urged the public sector to strengthen Thailand’s competitive edge to lift the country from low-income to middle-income levels, and minimise disparity in society to create equal opportunity.

Public debt is at 43.9 per cent which is much better than the situation in many countries in the region, said Mrs Shinawatra

She said the government emphasises growth on the quality-of-life and environmentally-friendly basis, as well as development of state administrative system.

The strategies will sustainably move the country in accord with His Majesty the King’s sufficient economy initiatives, she said.

The premier said taking the helm of Thailand in over a year has been challenging given internal and external factors, including volatile economy and international relations particularly with Europe which signifies democracy and equality.

“The country’s economy has been imbalance and society lacked management. Cooperative and integrated management in the public sector has quickly revitalised the economy, contributing to a national reserve of 48 per cent which is higher than earlier predicted while this year’s GDP is forecast at 5.5 per cent,”

She added that inflation is back to normal at 3 per cent while the government successfully alleviated the deficit which was recorded at Bt400 billion in the past.

Public debt is at 43.9 per cent which is much better than the situation in many countries in the region, she said. (MCOT online news)

Ms. Yingluck pointed out that Thailand was lacking behind in competitiveness as previous governments did not encourage large scale investments in the country’s infrastructure. In the past, she said, infrastructural investments were launched following a year-by-year budget planning, not on a sustainable basis. In addition, Ms. Yingluck said, her 16-point urgent policy, funded by the budgets allocated during the 2012 to 2013 fiscal years, has progressed as planned.

The Premier boasted the flood relief program, the minimum wage rise, tourism growth and the first car policy among other projects that her government has succeeded in.

She also claimed that investor confidence rose during the period mentioned as tax collections exceeded the target. The number of foreign direct investments in Thailand rose by 2,500 last year compared to the year earlier.

Ms. Yingluck said she is confident that the government will achieve a better economic growth rate within the first 6 months of this year. According to her, there is also sufficient capital reserve to sustain economic expansion.