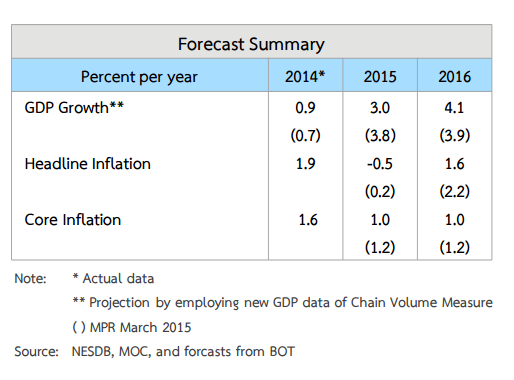 Thailand’s central bank has revised its projections for several key indicators, including GDP growth for 2015, indicating it has become more pessimistic about the country’s economic outlook.

The Bank of Thailand has adjusted the projected growth rate down to 3 % from an earlier projection of 3.8 % due to poor exports which are expected to contract by -1.5 percent instead of – 0.8 percent

The Thai economy is projected to recover more slowly than the previous projection mainly as a result of weaker-than-expected export growth while inflation is projected to decrease on the back of lower cost and demand pressure.

Major developments contributing to the MPC’s forecast revision include

(1) slower-than expected global economic recovery due to a slowdown in China and other Asian economies,

(4) increased global oil prices in the second quarter of 2015.

In light of the aforementioned economic assessment, the MPC lowered the growth projection for 2015, and judged that the risks around the central projection are skewed to the downside.

On June 10, 2015, the MPC voted unanimously to maintain the policy rate at 1.50 percent per annum with the assessment that the earlier conduct of monetary policy has thus far eased monetary conditions, while the direction of exchange rate movement has become more conducive to the economic recovery.

Nevertheless, the Committee will closely monitor Thailand’s economic and financial developments and stand ready to utilize available policy space appropriately in order to ensure that monetary conditions are sufficiently accommodative to support the ongoing recovery. At the same time, the committee will carefully watch the possible buildup of financial imbalances that may arise during the prolonged period of low interest rates in order to maintain long-term financial stability.

Thai Exports down 5% in May, for Five Consecutive month