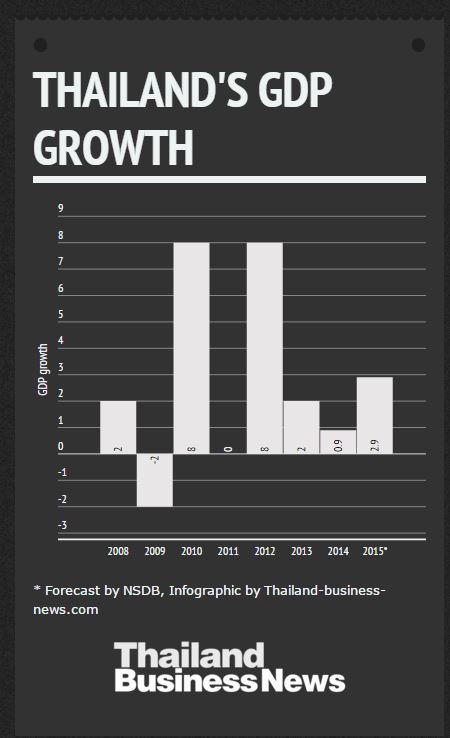 Economic growth this year is expected to stand at 2.9% –  the highest growth in three years, according to the Office of the National Economic and Social Development Board (NESDB).

He attributed the growth to greater government spending and investment.He then forecast that this year’s average growth was likely to stand at 2.9%,  an increase from 0.9% last year, the highest growth in three years.

The NESDB deputy secretary-general said factors contributing to the growth was tourist arrivals which was  expected to be  over 30 million this year.

The government’s economic stimulus measures also contributed to the growth as it would also result in greater household consumption and investment.

He said economic growth for next year was expected to be 3-4%, mainly due to the government’s economic stimulus measures, expansion in the tourism industry, as well as the recovery  of the global economic situation.

These factors would result in 3%  increase in the export sector. But he also warned of the drought situation in the country and external factor such as China’s economic slowdown  which could affect the growth.

Earlier this month Thailand’s Fiscal Policy Office has maintained its forecast of 2.8 percent for the country’s GDP growth in 2015

The tourism sector and government stimulus measures will likely contribute to economic expansion into the following year, with an estimated growth of 3.8 percent.

According to Kulaya Tantitemit, Executive Director of the Macroeconomic Policy Bureau, the government’s commitment to act swiftly on its budget disbursement and stimulus policies along with the country’s robust tourism industry will likely serve as key drivers of continued economic growth.

However, the global economic slowdown, particularly in China, will have greater adverse effect on the country’s exports than previously expected. Export numbers for this year are expected fall by 5.4 percent.

Thailand’s economy next year will continue to experience sustained growth, primarily driven by increased public investment, according to the central bank governor.

Bank of Thailand governor Wirathai Santipraphob commented on the country’s economic outlook for 2016 saying that there was a strong likelihood that the economy will enjoy sustained growth.

However he stated that this growth will not be evenly spread as many provinces economic development is still dependent upon the drought situation.

This will force agricultural prices down which will in turn affect the incomes of farmers.

The governor also stated that he was also concerned with household debt which at present is still high.

This factor could critically stall economic recovery but that he was confident that increased public investment by the government should be able to drive growth.

Furthermore, he said the government’s economic stimulus packages already in place should see positive results in the coming year.

Taken alongside the continued growth in the tourism sector, Thailand’s economy should experience positive growth in 2016, he added.