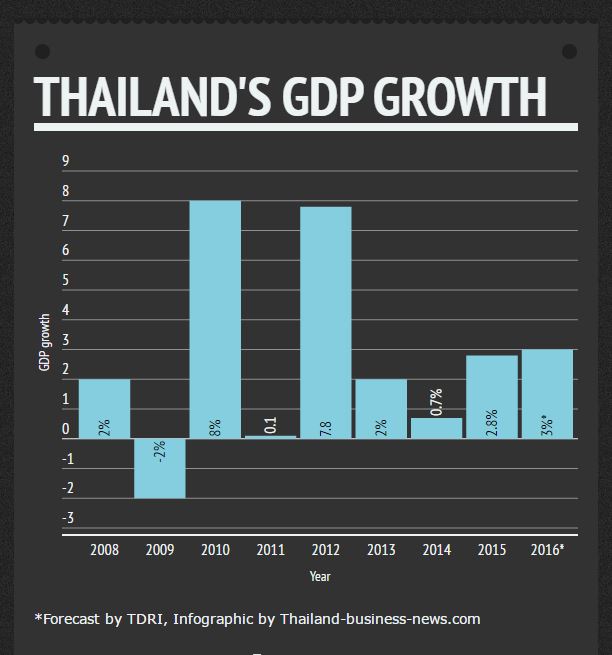 Thailand’s GDP growth hit a three-year high of 3.2% in the first quarter, thanks to government stimulus measures and rapid improvement in the tourism sector, says the country’s economic think tank.

Citing the aggressive deployment of stimulus measures by the government since last September, the National Economic and Social Development Board (NESDB) revised up its projection to a range of 3%-3.5% from 2.8-3.8% estimated in February, said secretary-general Porametee Vimolsiri.

According to the NESDB, the government has carried out 10 stimulus measures with a budget totalling 645 billion baht, of which 518 billion was earmarked for several types of soft loans and the rest went to government spending.

But with exports expected to shrink for a fourth year running and consumption crimped by high household debts and the worst drought in a decade, economists say more fiscal stimulus and lower interest rates may be needed to prevent growth momentum from stalling.

Southeast Asia’s second-largest economy grew a seasonally adjusted 0.9 per cent in the first quarter, boosted by government spending and tourism, the National Economic and Social Development Board (NESDB) said on Monday.

The pace was faster than 0.8 per cent in the fourth quarter and 0.6 per cent forecast in a Reuters poll.

From a year earlier, growth was 3.2 per cent, better than 2.8 per cent previously and higher than economists’ estimates.

From the fourth quarter of last year until now, a total of 529 billion baht has been spent, with 141 billion going out in the first quarter alone.

“Some 116 billion baht of the existing budget is sufficient to continue the growth momentum throughout the year,” Mr Porametee said.

Foreign tourist arrivals are expected to hit the new target of 33 million this year, up from the previous projection of 32.5 million.

Related Topics:GDPgdp ประเทศไทย
Up Next