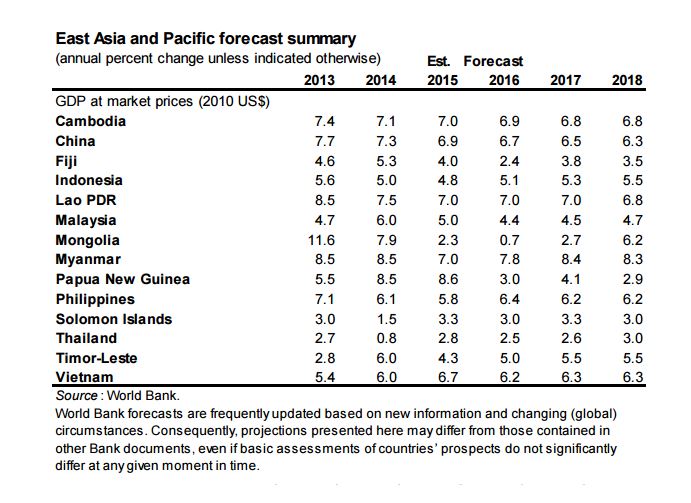 The World Bank is downgrading its 2016 global growth forecast to 2.4 percent from the 2.9 percent pace projected in January.

According to the latest update of its Global Economic Prospects report, commodity-exporting emerging market and developing economies have struggled to adapt to lower prices for oil and other key commodities, and this accounts for half of the downward revision.

Growth in the East Asia and Pacific region is projected to slow to an unrevised 6.3 percent rate in 2016, with China’s expansion expected to ease to 6.7 percent, as projected in January.

The region excluding China is projected to growth at 4.8 percent in 2016, unchanged from 2015.

This outlook assumes an orderly growth slowdown in China underpinned by smooth progress on structural reforms and appropriate policy stimulus as needed. Growth in the rest of the region is expected to be supported by rising investment in several large economies (Indonesia, Malaysia, Thailand), and strong consumption supported by low commodity prices (Thailand, the Philippines, Vietnam).

Among commodity exporters, growth in Indonesia is projected to pick up to 5.1 percent in 2016 from 4.8 percent, provided reforms are implemented to encourage investment and boost productivity. Output in Malaysia could slow to 4.4 percent in 2016 from 5 percent on slowing domestic demand.

Growth in Thailand is expected to accelerate gradually, but remain below 3 percent on average in 2016-18 as high household debt holds back consumption and export growth remains lukewarm.

All countries surveyed in the region, except for Mongolia, have better growth forecast than Thailand

“This sluggish growth underscores why it’s critically important for countries to pursue policies that will boost economic growth and improve the lives of those living in extreme poverty,” saidWorld Bank Group President Jim Yong Kim. “Economic growth remains the most important driver of poverty reduction, and that’s why we’re very concerned that growth is slowing sharply in commodity-exporting developing countries due to depressed commodity prices.”

State-owned enterprise reforms, including measures to strengthen transparency and governance, would reduce contingent fiscal risks in China, Thailand and Vietnam.

Deepening regional trade and investment would boost economic activity and create jobs. New partnerships, including the Trans-Pacific Partnership trade accord, if implemented, and other regional trade agreements, including ASEAN economic community and the proposed Regional Comprehensive Economic Partnership, should all help anchor structural reforms, lift trade, and raise potential growth in the region.

Commodity-importing emerging markets and developing economies have been more resilient than exporters, although the benefits of lower prices for energy and other commodities have been slow to materialize.

These economies are forecast to expand at a 5.8 percent rate in 2016, down modestly from the 5.9 percent pace estimated for 2015, as low energy prices and the modest recovery in advanced economies support economic activity.

Among major emerging market economies, China is forecast to grow at 6.7 percent in 2016 after 6.9 percent last year. India’s robust economic expansion is expected to hold steady at 7.6 percent, while Brazil and Russia are projected to remain in deeper recessions than forecast in January. South Africa is forecast to grow at a 0.6 percent rate in 2016, 0.8 of a percentage point more slowly than the January forecast.