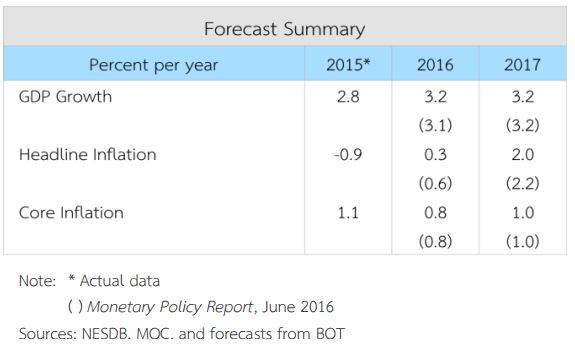 Thailand’s economic growth in 2016 has been revised up slightly to 3.2%, due to a better-than-expected private consumption growth in the second quarter, partly from temporary factors.
On the other hand, exports are projected to expand at a lower rate compared to previous assessment as a result of trading partners’ slow recovery, and the tourism sector that might have been negatively affected by short-term domestic factors.
But the central bank is concerned that the country’s economic growth may grow less than 3.2%, attributing Brexit, the ongoing clampdown on zero-dollar tours as the main reason.

Jaturong Jantarangs, an assistant governor of the Bank of Thailand’s  monetary policy group and the Monetary Policy Committee (MPC) secretary, stated that a result of the United Kingdom’s decision to leave the EU in its Brexit consensus, Thailand’s economic growth for 2016 runs the risk of growing at less than 3.2%.

Meanwhile, the risks to the projected growth tilt more downward.

Downside risks include (1) the impact of Brexit, which could hinder the recovery of global economy; (2) financial risk in China; (3) private sector’s limited ability to cope with economic shock; and (4) the effect of the government’s attempt to tackle zero-dollar tour operations on the number of tourists.

Meanwhile, upside risks come from the accelerated public spending, and the impact of stimulating measures on the economy that could be higher than expected. The MPC keeps core inflation projection unchanged for both 2016 and 2017, but revises headline inflation in both 2016 and 2017 down in tandem with the lower oil prices. Risks to inflation forecasts are assessed to be skewed more downward, in line with risks to growth projection