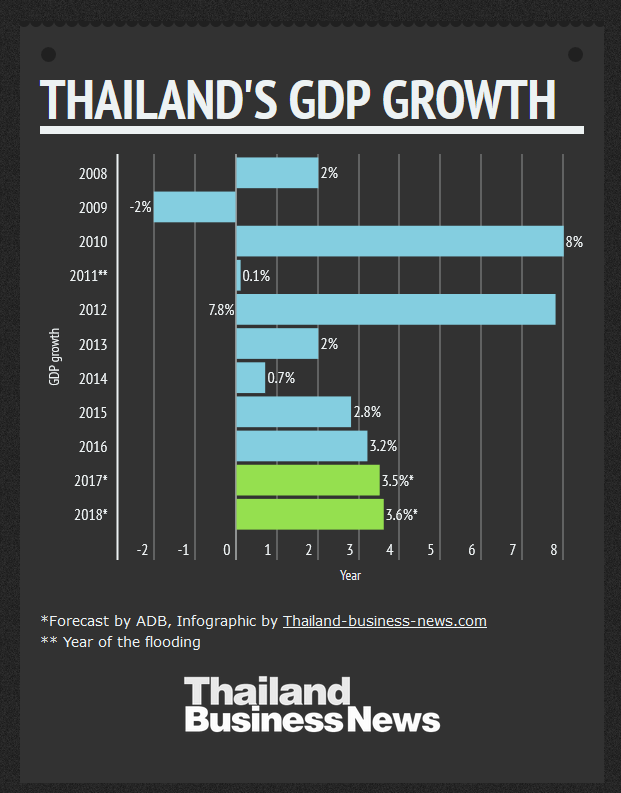 The National Economic and Social Development Board (NESDB) announced Thailand’s 1Q2017 GDP growth figure to be 3.3%YOY (as compared to the same quarter last year) or a 1.3%QOQ increase from last quarter after seasonal adjustment.

The export sector and the tourism sector supported the Thai economy

Exports of goods expanded by 2.6%YOY, the highest growth over the past 4 years, due to the rebound in many goods categories and a steady growth in almost every export market except the passenger vehicle export market to the Middle East.

Moreover, the recovery of the export sector was contributed by both price and quantity factors.

The growth of the global crude oil prices of more than 57%YOY in the first quarter caused steep increases in the prices of oil-related products such as rubber and rubber products, refined fuel, and chemical and plastic products.

In addition, the improvement of the global manufacturing sector has induced greater demand for key Thai industrial goods such as electronics and electrical appliances.

Exports in the service sector also showed signs of recovery from the government’s crackdown on illegal tours, expanding at 3.2%YOY accelerating from the previous quarter growth of 0.4%YOY.

The number of tourists in the first quarter grew 12%QOQSA while the number of Chinese tourists grew 32%QOQSA, reflecting a rebound from a short-term setback.

The growth of private consumption continued although not evenly distributed

Private consumption rose 3.2%YOY, led by a shift to a high growth of durable goods consumption after a contraction in the previous quarter. Passenger vehicle sales grew 13.9% YOY thanks to the launches of many new models including ones that were delayed from the end of last year during the grieving period and owing to new sales promotions in the beginning of this year.

However, the improvement in private consumption was concentrated in durable goods, because the purchasing power increased only in some groups of households. The consumption of nondurable goods and semi-durable goods remained relatively stable since the overall household income has not bounced back in full force, considering a 0.6%YOY drop in employment and a 0.7%YOY decrease in wage in the first quarter.

Public investment grew steadily at 9.7%YOY following the investment in infrastructure projects both ongoing and starting this year.

However, private investment stayed contracted at 1.1%YOY, resulted from the sluggish investment in manufacturing sector due to excess production capacity.

Industrial factory construction shrank by 11.6%YOY. Equipment and machinery purchases dipped by 0.3%YOY. Other construction contracted, coming off a high base last year during the government scheme to increase investment in the sub-district level.

EIC expects a continuous expansion for the Thai economy, forecasting a 3.3%YOY growth for 2017.