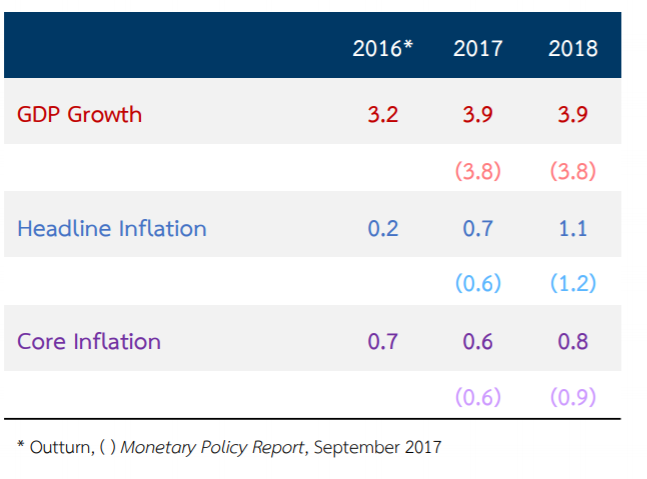 The Monetary Policy Committee resolved unanimously to retain policy interest rate at 1. 5 percent where it’s been since 2015, according to a Bank of Thailand statement on its website on Wednesday

Mr Chaturong Chantharang, assistant governor of the Bank of Thailand for monetary police, said that the MPC wanted to continue using lenient monetary policy to boost sustained economic expansion and to keep inflation rate within target.

The Thai government is hoping for a pick up in investment and consumer spending to broaden the expansion in Southeast Asia’s second-largest economy, which remains export-reliant.

According to economic assessments this year and next year, the economy tends to expand at higher rate than previously projected – 3.9 percent instead of 3.8 percent.

Forecast Summary as of December 2017

The Thai economy was projected to achieve faster growth than previously assessed driven by continued improvements in exports of goods and services, the gradual recovery in private consumption and investment, and continued growth in public
expenditure.

• Inflation forecasts remained close to the previous assessment with inflation still projected to slowly rise.
• The growth outlook was still subject to risks that warranted close monitoring, namely uncertainties pertaining to US economic and foreign trade policies as well as geopolitical risks.