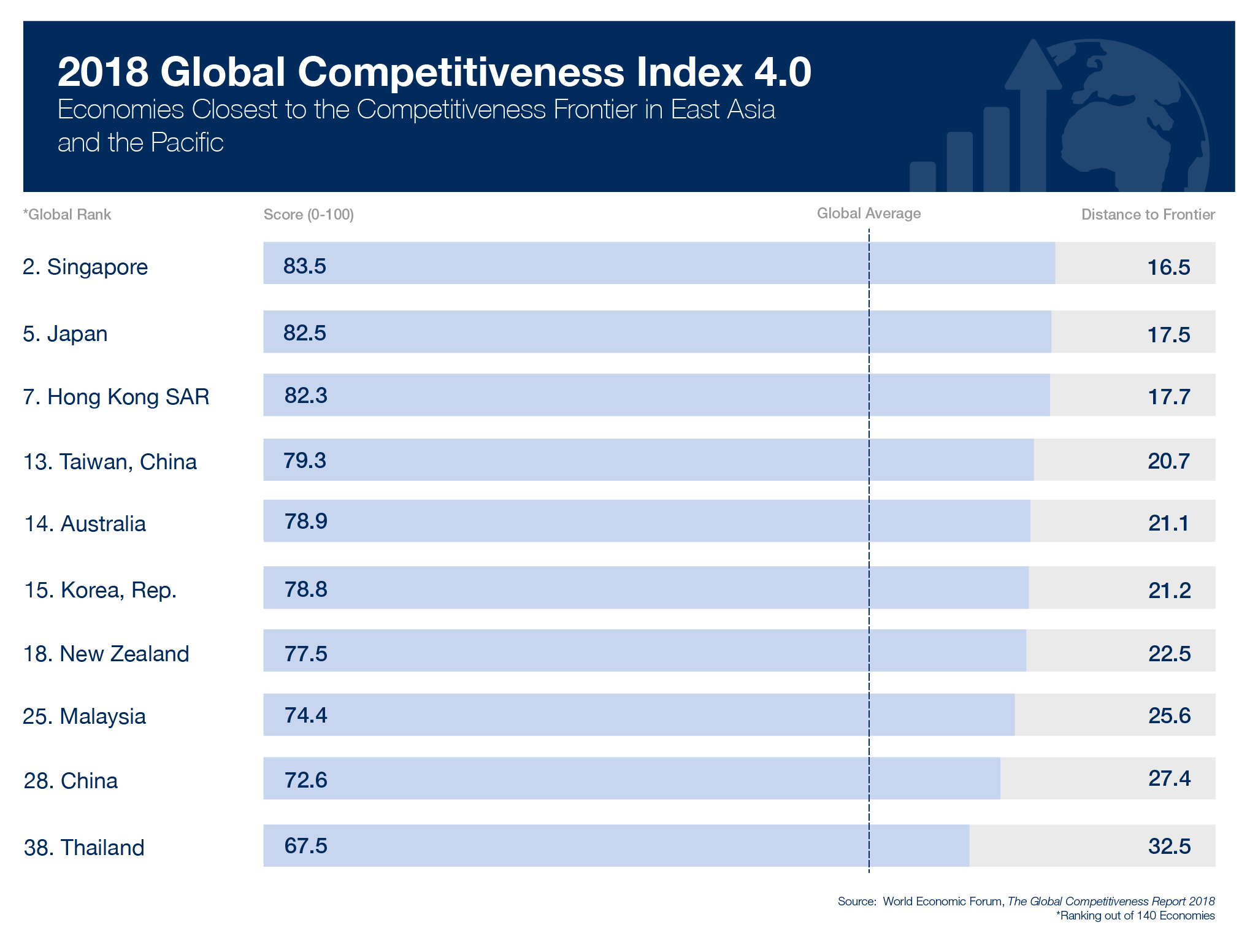 How well countries adapt to the Fourth Industrial Revolution (4IR) will determine whether they ‘thrive’ or ‘stagnate’ and could further divide workforces and increase social tensions, according to the latest version of the World Economic Forum’s Global Competitiveness Report.

Almost 40 years after its first annual assessment of the global economy, the Forum’s 2018 report uses new methodology to understand the full impact of the 4IR, and finds factors including human capital, agility, resilience, openness and innovation becoming increasingly important.

A root-and-branch revamp of the WEF’s rankings, reoriented towards future technology-driven growth, pushed Switzerland into fourth place, with Singapore second and Germany third out of 140 countries, each marked on a scale from 0 to 100.

Besides Singapore and Japan, Hong Kong SAR (7th, 82.3) is the third economy from East Asia and the Pacific region in the top ten, confirming the widely held view that overall growth momentum in the region is set to last.

These three economies boast world-class physical and digital infrastructure and connectivity, macroeconomic stability, strong human capital, and well-developed financial systems. Australia (14th, 78.9) and Korea (15th, 78.8) are among the top 20. The biggest gap in this region lies in the development of an innovation ecosystem—New Zealand ranks 20thon the Innovation Capability pillar, while the Republic of Korea ranks 8th.

Emerging markets such as Mongolia (99th, 52.7), Cambodia (110th, 50.2) and Lao PDR (112th, 49.3) are only half way to the frontier, making them vulnerable to a sudden shock, such as a faster-than-expected rise in interest rates in advanced economies and escalating trade tensions.

“The US scores 85.6 which essentially means it’s still about 14 points away from that frontier of competitiveness,” said Saadia Zahidi, a member of the WEF’s managing board.

The old rankings had docked marks from the United States for its macroeconomic environment, high government debt being a particular weakness. But the new rankings awarded it 99.2 for “debt dynamics”, an almost perfect score.

“Productivity is the single most important driver of growth in 2018. With the Fourth Industrial Revolution in full swing, there is a need to rethink the drivers of competitiveness and therefore of long-term growth.”

One of the key findings from the report is that all economies could do better in certain areas. For example, while Singapore might be the most ‘future-ready’ economy, Finland outdoes it for having a digitally skilled workforce.

And while low and and middle-income economies can leverage technology to jumpstart growth, the report emphasises the importance of ‘old’ developmental pillars, such as governance, infrastructure and skills.