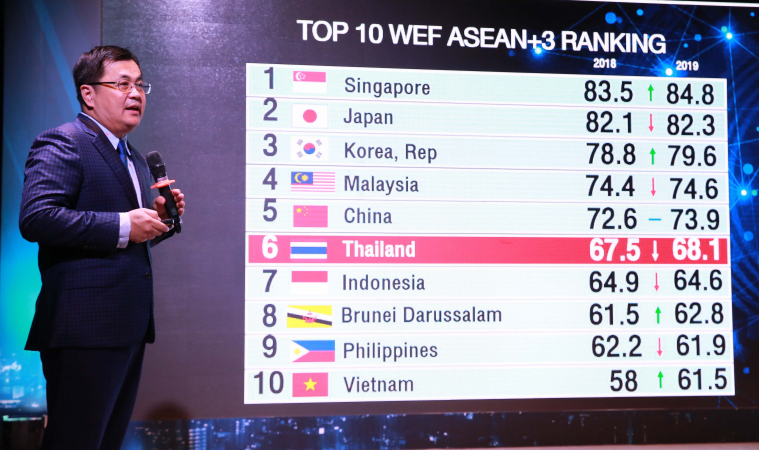 Thailand is the 40 most competitive nation in the world out of 140 countries ranked in the 2018 edition of the Global Competitiveness Report published by the World Economic Forum.

In its 2019 Global Competitiveness Report, the WEF measured the strength of 103 key indicators, such as inflation, digital skills and trade tariffs, across 141 countries.

Singapore has overtaken the U.S. to become the most competitive nation in the world, according to the World Economic Forum (WEF).

The changing geopolitical context and rising trade tensions are fuelling uncertainty and could precipitate a slowdown. However, some of this year’s better performers in the GCI appear to be benefiting from the trade feud through trade diversion, including Singapore (1st) and Viet Nam (67th), the most improved country in this year’s index.

Asia-Pacific is the most competitive region in the world, followed closely by Europe and North America .

With a score of 84.8 (+1.3), Singapore is the world’s most competitive economy in 2019, overtaking the United States, which falls to second place. Hong Kong SAR (3rd), Netherlands (4th) and Switzerland (5th) round up the top five.

The 10 most competitive countries in the world

The presence of many competitive countries in East Asia and the Pacific makes this region the most competitive in the world, followed closely by Europe and North America.

In Asia Pacific, Singapore leads the regional and the global ranking thanks to a top-10 performance in seven of the 12 GCI pillars, including Infrastructure (95.4), Health (100), Labour market (81.2), Financial system (91.3), quality of public institutions (80.4) and it takes advantage of being the most open economy in the world. It is followed by Hong Kong SAR (3rd), Japan (6th), and Korea (13th).

China is 28th (the highest ranked among the BRICS) while the most improved country in the region this year (Viet Nam) is 67th. The ranking reveals how heterogenous the regional competitiveness landscape is. Although the region is home to some of the most technologically advanced economies in the world, the average scores of the innovative capability (54.0) and business dynamism (66.1) are relatively low, lagging behind Europe and North America.

The Global Competitiveness Report 2019 reveals an average across the 141 economies covered of 61 points. This is almost 40 points short of the “frontier”. It is a global competitiveness gap that is particularly concerning, given the world economy faces the prospect of a downturn. The report’s survey of 13,000 business executives highlights deep uncertainty and lower confidence.