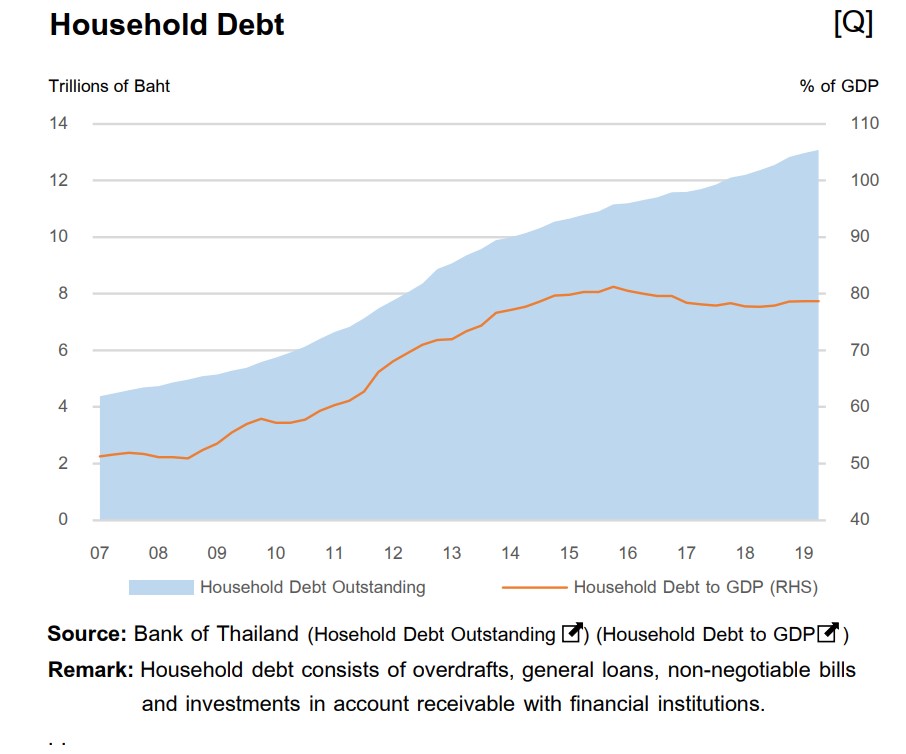 However, there remained some pockets where risks could continue to build up, especially given the subdued growth outlook both at home and abroad and the prolonged low interest rate environment.

The Bank of Thailand announced the outcome of the joint meeting between the MPC and the FIPC on 16 December 2019 to assess risks to Thailand’s financial stability.

1. New residential mortgages posted a positive growth for the first nine months of 2019.

Following the implementation of the loan-to-value (LTV) measure, mortgages granted to first-time homebuyers (servicing one mortgage loan) stood unaffected and the LTV ratio of these loans stayed high. Meanwhile, speculation and imbalances in the real estate market showed signs of abating in line with the measure’s intended objectives.

(1) Financial institutions tightened their underwriting standards, as reflected by the decline in the average LTV ratio for second and subsequent mortgages.

(2) Speculative demand showed signs of cooling down, as seen from the decline in the number of commercial banks’ new mortgage accounts given as second or subsequent mortgages, with the decline in Q3 softening from that in Q2.

(3) Developers also delayed project launches, which would help facilitate a reduction in oversupply and allow the housing market to return to a balanced condition going forward.

Nonetheless, oversupply in certain locations appeared poised to decline at a pace slower than market’s average, as these locations either faced a drag from foreign demand or had a high level of unsold units even before the LTV measure took effect.

Another concern was the pace of adjustments among small local developers, which lagged behind that of large developers. In light of these assessments, the committees would continue to monitor adjustments in the housing market, especially oversupply in the condominium segment, where supply took longer to adjust compared to the low-rise segment.

2. The debt situation for households and small and medium-sized enterprises (SMEs) continued to raise concerns.

The household debt to GDP ratio stayed at a high level and was poised to rise further amid the subdued growth outlook.

Part of this was driven by commercial banks and non-banks’ continued expansion in retail lending, notably credit cards and personal loans.

Special attention should be given to households whose financial positions have become more fragile, especially those sensitive to income shocks (e.g. those subjected to lay-offs or reduced working hours). On the corporate front, the credit quality of SMEs continued to deteriorate.

There were also signs that the credit quality issue began to spread from small enterprises, which had been in vulnerable positions for quite some time, to larger enterprises.

In an environment where economic growth would remain subdued and businesses continued to face structural changes, the committees stressed that the task of resolving household and SME debt situations would require integrated efforts from all parties.

Both preventive and corrective measures would need to be employed, with priority given to restructuring of troubled loans. The Bank of Thailand (BOT) had urged financial institutions to (1) lend to retail customers with due consideration of debtors’ affordability and living expenses; and (2) engage borrowers proactively as soon as signs of weakening credit quality were detected and expedite the debt restructuring process for SMEs that still had business potential but faced temporary liquidity shortage. The BOT had also collaborated with Sukhumvit Asset Management (SAM) to expand the scope of the Debt Clinic Project to cover debtors with a single creditor and those currently facing prosecution. Further study would be needed to identify additional measures that could help debtors at a wider scale.

3. In the prolonged low interest rate environment, there continued to be a build-up of risks from corporate funding activities and search-for-yield behavior.

3.1 Corporates issued high-yield bonds in a growing amount as a means of financing, as banks had become more cautious in lending to corporates.

In addition, foreign investment term funds (FIF term funds) still concentrated their investment abroad in a small number of countries and issuers. These instruments, namely high-yield bonds and FIF term funds, were held largely by retail investors, who might not be fully aware of all the risks involved.

In response to this, the Office of the Securities and Exchange Commission (SEC) had enhanced its supervision of bond issuances and mutual funds and continued to monitor the situation closely.

The requirements on sales processes and risk disclosures had been strengthened, so that investors received adequate information and advice that were suitable to their risk tolerance.

3.2 Meanwhile, large conglomerates ramped up their financing, especially via bond issuances, which contributed to a higher degree of concentration risks in the corporate bond market.

Furthermore, these conglomerates’ complex organizational and financial structures made it difficult to assess their risks in a comprehensive manner. Monitoring their risks would thus require close collaboration among related regulators.

Recently, insurance companies had been making adjustments both in terms of investment assets and product offerings, with a shift away from products with guaranteed yields toward those providing protection. To help facilitate adjustments, the Office of Insurance Commission (OIC) had relaxed the regulations to allow for investment outside the ASEAN region, as well as to require more complete information disclosures to prepare for the ongoing shift toward protection products.

Meanwhile, the search-for-yield behavior continued to persist, as reflected in the rising share of investment in corporate bonds.

The committees urged all relevant parties to expedite the enactment of the ministerial regulations accompanying the Cooperatives Act, especially the parts related to investment, management of credit and liquidity risks, as well as indebtedness of cooperatives’ members. Looking ahead, there continued to be a need to monitor savings cooperatives particularly those with liquidity shortage, which could face additional pressures given the subdued economic outlook.

While the committees assessed the Thai financial system to be sound overall, financial stability risks would likely remain elevated going forward. The synchronized economic slowdown both at home and abroad, coupled with the prolonged low interest rate environment, would still provide a backdrop conducive to a build-up of fragilities in the financial system. The committees would continue to monitor developments in the four key issues discussed above, assess the effectiveness of the implemented measures, and explore further policy options to prevent a potential build-up of systemic risks in the future.

The BOT, the SEC, and the OIC would continue to collaborate closely in assessing and monitoring risks to financial stability. The three regulators would improve and enforce regulations as warranted by circumstances to prevent the build-up of vulnerabilities that could undermine national financial stability.