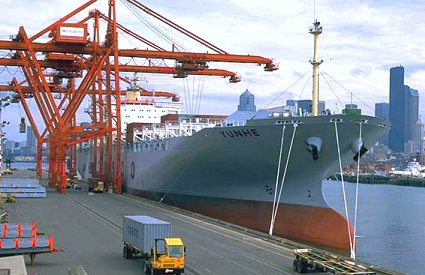 Commerce Minister Porntiva Nakasai on Tuesday announced that exports in December 2009 surged by 26.1 per cent, the highest level of the year, with the value of US$14.63 billion.

Exports for the whole year totaled $152.5 billion, down only 14.2 per cent from that of the previous year.She said key exports turned to increase in all categories, particularly farm and agro-industry products such as rice, natural rubber, cassava, sugar, and foods which surged by 42.1 per cent year on year.The exports of industrial products such as electrical appliances, vehicles, and electronics rose by 18.6 per cent.

Exports for the whole year totaled $152.5 billion, down only 14.2 per cent from that of the previous year

Exports to key destinations soared for the second month by 20.9 per cent and those to new destinations such as China, Australia, Hong Kong, Indochina, Myanmar, India, and Taiwan rose by 31.5 per cent.Mrs Porntiva attributed last year’s fourth quarter export surge to higher demand upon the economic and trade recovery of major export destinations.