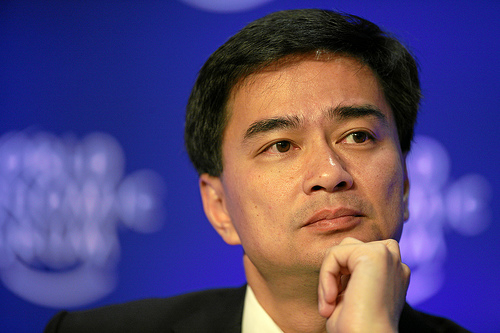 While analysts have said that the prime minister has failed to end Thailand’s divisions, he said that the economy “should help gain us the support so that there is greater stability”.

Abhisit said that the Thai economy surged strongly in the final quarter of 2009. Instead of a projected contraction of three per cent for the year, he said it could be restricted to minus 2.8 per cent.

Exports were back in double-digit growth in November and December so the government has now set a target of 14 per cent growth for 2010.

The protests last year brought Bangkok airport to a standstill trapping many foreign tourists. But Abhisit said “In December we actually had a record high number of tourists coming to Thailand. 1.6 million.”

“We have projected this year’s (economic) growth at 3.5 per cent but we are now confident we can do better than that,” the prime minister said.

Thailand’s inflation hitted 4.1% to a 16-month high in January