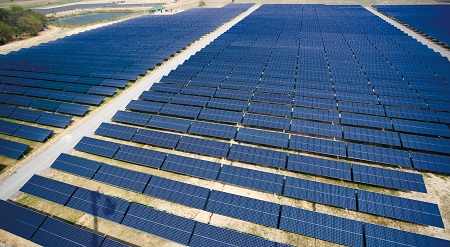 Today, it is generally accepted that electricity is a major factor in driving a nation’s economy and improving people’s living. Given the continuous economic growth of Thailand in the past 30 years, the country’s annual electricity demand has greatly increased from 14,000 million units or gigawatt-hour (GWh) to 150,000 GWh at present, or at an average annual growth rate of 8.2 per cent.

Electricity demand has increased sharply in the industrial sector as a result of the policy of successive governments trying to scale up investment in the industrial sector. In addition, Thailand’s economic development has resulted in growing electricity consumption by the commercial and residential sectors driven by higher income levels of consumers whose consumption characteristics have shifted towards greater convenience and modernization.

Kyocera Corporation announced that it has agreed to supply roughly one million solar modules equivalent to 204-megawatts (MW) for Thailand's largest solar power project, which is being implemented by Solar Power Co., Ltd. Under the project, 6MW "Solar Farms" are to be constructed at 34 sites concentrated in northeastern Thailand.

A greater number of electrical appliances are thus widely used, for example, refrigerators, electric fans, rice cookers, televisions, light bulbs, including air-conditioners, computers, and so on. These appliances have become necessities in Thai households. As electricity becomes a major factor in the country’s economic development and people’s living, energy development plans have so far focused on expansion of electrification to ensure adequate and extensive service coverage.

Consequently, the government has to work out the power development plan of the country to increase the generating capacity of the system so as to adequately meet the rising demand. In 1979, the peak demand of power was 2,964 megawatts (MW) while that in 2009 amounted to 22,596 MW. Meanwhile, power transmission and distribution systems have been so much expanded, particularly in the service areas of the Provincial Electricity Authority (PEA), that they can presently cover almost all areas nationwide. However, the planning of power generating capacity expansion is a complex matter because related factors under various conditions and policy guidelines are involved, for instance:

1. The amount of power generating capacity to be increased in each year which depends on the projected increase of power demand in the future, taking into consideration energy conservation measures and energy efficiency improvement as well.

3. Types of fuel to be used for each type of power plants, taking into consideration the security of energy sources, prices and policy guidelines of the government on energy supply management.

4. Power plant sites which depend on each particular type of energy sources because transportation of an enormous amount of fuel for power generation will be necessary and also power transmission system and service areas have to be taken into consideration.

5. Impact on communities and environment, including water resources, and disposal of residues and waste as well as pollutions resulting from power generation – these are important issues to be addressed in constructing a power plant.

Careful consideration of all the above-mentioned is required to enhance stability of power generation at low cost under the policy framework of the government.

In regard to the selection of fuel types for power generation, one of many factors the government has to consider, natural gas is presently the main fuel used in Thailand’s power generation system. In 2008, power generated from natural gas-fired power plants of the Electricity Generating Authority of Thailand (EGAT), Independent Power Producers (IPPs) and Small Power Producers (SPPs) accounted for a share of 70 per cent of the total power generation. Next to natural gas were such “solid fuels” as lignite, constituting 12.6 per cent, and imported coal of which the quality is better than lignite, representing 8.2 per cent. The share of power generation from other fuels was relatively low, i.e. 4.7 per cent from hydropower; 1.4 per cent from renewable energy sources, such as rice husks, bagasse and mini/micro hydropower altogether; and only 1 per cent from oil. In addition, Thailand’s power system has begun to depend on imported electricity from the Lao People’s Democratic Republic and Malaysia, at a share of around 1.9 per cent.

Thus, it can be noted that Thailand heavily relies on natural gas to produce electricity. Frequently asked questions then focus on the wisdom of depending upon one particular type of fuel at such a high rate and possible impact this may have on the country’s power generation system. The answers are based on various factors and circumstances, which differ in one country from another.

One factor usually considered as a priority involves the sources of fuel, which should be domestic ones to help reduce dependency on energy imports. This seems to be a major factor in many countries, such as the United States, Australia, South Africa, and China. These countries have plenty of coal; therefore, it is not surprising that coal is their primary source of fuel for power generation. In the case of Canada and Brazil, they have considerable water resources; therefore, hydropower is the main source of their power generation. Although France has no uranium resource, the country has intensively developed nuclear technology; therefore, nuclear power is opted as the main source of power generation. On the contrary, countries lacking their own energy resources, such as Japan and Korea, usually opt for diversification of fuel types to be imported in order to reduce risks of excessive dependency on any particular type of energy sources.

Bank of Thailand raises rate to 2.25%