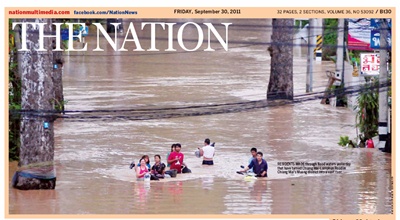 The Department of Royal Irrigation is trying to start its new canal excavations, hoping this will help drain the inundation and prevent inland flooding. Meanwhile, the plan to create the second Chao Phraya River has been considered to release the water runoff in the East of Bangkok into the Gulf of Thailand.

Thailand faces its worst flooding in more than a decade, and Thailand’s flood-related death toll climbed to 205, as the waters of northern Thailand’s Ping River rose here to a 110-year record high, flooding the central commercial area in the northern metropolis of Chiang Mai.

Thailand faces its worst flooding in more than a decade, and Thailand's flood-related death toll climbed to 205

According to the Ministry of Public Health, 10 medical emergency units were deployed in Chai Nat province to rescue the stranded and referred them to a local hospital. Local public health offices have also been assigned to deploy mobile medical units to help the victims in the region.

According to the report, the project could be worth 100 billion THB with the objective to create the river that is 200 meters wide and 8 meters deep. It is expected to be built along the new motorway which runs through 7 provinces connecting the following districts; Bangsai-Lat Lum Kaeo-Lat Krabang-Bang Khun Thian-Bang Phli-Krathum Baen-Sam Phran and Sai Noi.

The Department of Highway will conduct a feasibility study next year and hopes that the motorway could be built and completed within 10 years. Dr. Somkiat Prajumwong, Director of the Irrigation Department’s Water Management Division said following His Majesty the King’s advice on flooding solutions; the Department of Royal Irrigation will implement 4 projects which have been proven to be effective in dealing with the issue at hand.

Dr. Somkiat said all of them would permanently prevent inland flooding in the lower central region which consists of Chai Nat, Sng Buri, Suphan Buri, Ang Thong, Ayutthaya, Pathum Thani, Nonthaburi and Bangkok. They have already been proposed to the Cabinet for consideration and could begin as early as next year.

The first project is aimed at widening the Chai Nat and Pasak canals while a new waterway is expected to be excavated and extended into the Raphiphat and Chai Thalae canals which are connected to the Gulf of Thailand. They could drain as much as 700 cubic meters per second from initially 200 cubic meters per second. This can cost up to 10 billion THB and take roughly 3 years to complete.

The plan to create the 2nd Chao Phraya River, which has been proposed before in the past, will be incorporated with the Ministry of Transport’s 3rd ringroad project; but further study is needed to make sure both of them could be executed simultaneously.

Meanwhile, the third one or the floodway project will not only serve as a draining passage but also an irrigation system for farming. The passage will begin from Chai Nat all the way through Suphan Buri before reaching the Gulf of Thailand with the combined length of 200 kilometers. The last project will include creating a detour for water from the Tha Chin River which is too curvy to direct the excessive amount of water from the northern region straight to the open sea in the Gulf of Thailand.

Thailand’s Water Management to Be Improved to Fight Flooding Situation