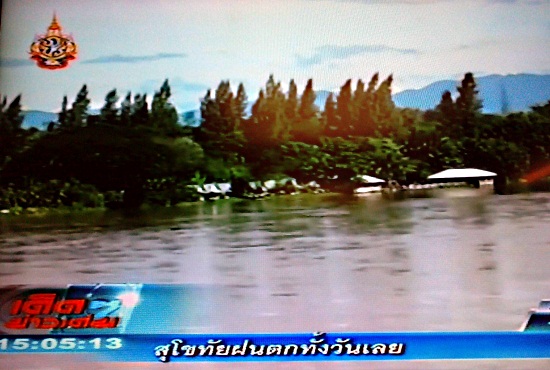 Permanent Secretary for Interior Pranai Suwannarat, in his capacity as a director of the 24/7 Emergency Operation Centre for Flood, Storm and Landslide, reported as of today that 179 districts of 58 provinces in the country’s northern, central and northeastern regions have been hit by floods, affecting nearly 2.5 million people and damaging more than 7.5 million rai of crops, and 123 roads and highways.While 2,420,868 people have been impacted by the worst flooding in many years, the death toll climbed to 224, with two still missing, Mr Pranai said.

As heavy overnight rains caused land and rock slides to block roads in the northern province of Lampang, Lampang mayor Paitoon Phothong confirmed an 88-year-old man in the provincial seat was drowned after being swept away by torrential forest runoff while sleeping at night.A 65-year-old man remains missing, swept away while trying to cross a road. A rescue team is searching for him, Mr Paitoon said.

The mayor also reported 700 households in three subdistricts were affected by the overnight forest runoff.The director of the 24/7 Emergency Operation Centre for Flood, Storm and Landslide warned people in provinces in the North and Northeast to beware of heavy rains as a result of tropical storm Nalgae Oct 6 to 8 after it makes its landfall in Vietnam Wednesday.

Meanwhile, Bangkok Deputy Governor Pornthep Techapaiboon on Monday assured the public that the Bangkok Metropolitan Administration BMA can handle the increasing amounts of water from the northern part of the country, as well as the continued heavy rains in the capital.

Bangkok remains at risk of flash floods over the next two weeks, when the seasonal peak tide is expected, Agriculture Minister Theera Wongsamut warned yesterday.

The high tides were likely to exacerbate flooding in many Central provinces in the Chao Phraya basin while drainage at major water gateways was at its highest capacity, he said.

Tropical storm Nalgae was expected to cause heavy rain across Thailand, but perhaps just light rain in the Central region. It should not cause a heavy increase in floodwater, so the situation in Bangkok should ease.

Thailand’s Water Management to Be Improved to Fight Flooding Situation