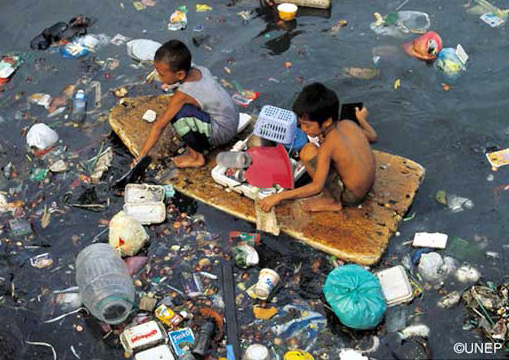 A new ‘green’ industrial revolution is needed in the Asia-Pacific region that catalyzes dramatic improvements in resource efficiency if the countries and communities there are to prosper in the 21st century.

A new report launched today estimates that per capita resource consumption of ‘materials’ in the region, such as construction minerals and fuels, needs to be around 80 per cent less than today if sustainable development is to be achieved.

The report, prepared by the UN Environment Programme (UNEP) and partners including the Commonwealth Scientific and Industrial Research Organization, says Asia Pacific’s dynamic growth of the past few decades has reduced poverty and increased wealth and per capita incomes.

But that has come at a price that is “exacting a high-current and future-environmental cost. Problems include pollution including greenhouse gas emissions, biodiversity loss, deteriorating ecosystems and rapid resource depletion”.

Total materials consumed in 2005 alone – including biomass, fossil fuels, metals and industrial and construction materials – amounted to around 32 billion tonnes according to the report: Resource Efficiency-Economics and Outlook for Asia and the Pacific.

Without a decoupling of GDP growth from resource use, Asia Pacific is likely to be using 80 billion tonnes materials by 2050.

Without world-wide action global resource consumption could triple by mid-century to 140 billion tonnes according to a previous report by UNEP’s International Resource Panel launched earlier this year.

The report underlines that Asia Pacific has however enormous opportunities to dramatically boost resource efficiency and in doing so boost economic growth, generate new kinds of clean tech industries and reduce if not overturn losses linked with environmental degradation.

The global economy outside Asia Pacific has been registering efficiency gains in respect to the use of materials.

“In 1970-2005, material efficiency has improved from about 2.2 to 1.1 kilogram per US dollar of GDP for the rest of the world,” says the Asia-Pacific resource efficiency report.

In Asia Pacific however efficiency improvements have been stagnant to 1990 and ‘since then the region has lost efficiency, requiring 3.1 kg of materials per US dollar of GDP by 2005,” says the study.

Achim Steiner, UN Under-Secretary General and UNEP Executive Director, said: “These new findings come some nine months before the Rio+20 conference where the world needs to get back into the business of actioning a truly transformational sustainability agenda”.

“The remarkable changes that occurred in the intervening years are perhaps nowhere more visibly illustrated than in Asia and the Pacific where breathtaking economic growth has lifted more than half a billion people out of poverty-but with profound social and environmental consequences,” he added.

“This new report spotlights the challenges but also the opportunities for a transition to a low carbon, far more resource efficient Green Economy not as an alternative to sustainable development but as a means of implementing it,” said Mr Steiner.

“The analysis, innovative modeling and scenarios outlined in this new report provide a path for Asia Pacific that can be taken forward to Rio+20 next year and beyond-one that continues its dynamism and accelerates the investments and transformations in areas such as renewable energies and forests already occurring in this region and across the globe,” he added.

In the coming decades, the region could be the most important driver of global resource use and related environmental impacts, including resource scarcity, pollution and climate change, unless the patterns of natural resources use are reversed.

The speed and magnitude of new infrastructure development and productive capacity in the region represents both a huge challenge and a great opportunity for innovation and technological ‘leap-frogging’.

The Asia Pacific report is part of a series, the Resource Efficiency: Economics and Outlook for Latin America was launched in the region in July (see notes to editors). This work was made possible with support from the Government of Norway.