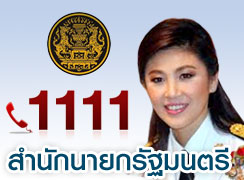 Prime Minister Yingluck Shinawatra said that it is not necessary for the Government to declare the ongoing flooding a national disaster now, as the problem is still manageable.

The Prime Minister thanked neighboring countries for their donations in cash and in kind to help flood victims in Thailand and for their concerns about the situation. She also stated that there is no need for Thailand to seek assistance from foreign countries for the time being.

The Government has set up the Flood Relief Operations Center at Don Mueang Airport in Bangkok. Mrs. Kristie Kenney, the American Ambassador to Thailand, visited the center on October 10, and said that US President Barack Obama had expressed his condolences on the current flooding situation in Thailand.

She also expressed the US government’s readiness to assist Thailand, if requested. In the face of this situation, Prime Minister Yingluck has decided to postpone her overseas travel to Singapore and Malaysia, as part of her familiarization trips to ASEAN countries.

She said that all relevant agencies are working in an integrated manner at the Flood Relief Operations Center, with an emphasis on three major tasks: prevention, evacuation, and support. Regarding flood prevention in Bangkok, especially between October 13 and 17 at peak tide, the Prime Minister said that sand bags had been prepared as embankments at three major sites: Mueang Ek area, Taling Chan, and Rangsit. Embankments have also been reinforced, together with canal dredging, to protect the capital from flooding. She said that during the upcoming period, no new storms would come to Thailand, but people should closely monitor the situation.

Labor Minister Phadermchai Sasomsub said that the Department of Labor Protection and Welfare and the Department of Employment had been assigned to discuss problems with industrial estates affected by the floods. The industrial estates, especially those in Pathum Thani, Rayong, Chon Buri, Samut Sakhon, and Samut Prakan, have been urged not to lay off workers. There are 9,369 workplaces in the 30 provinces being damaged by the floods, with more than 160,000 workers being affected.

via Inside Thailand — Flooding Situation in Thailand Still Manageable.