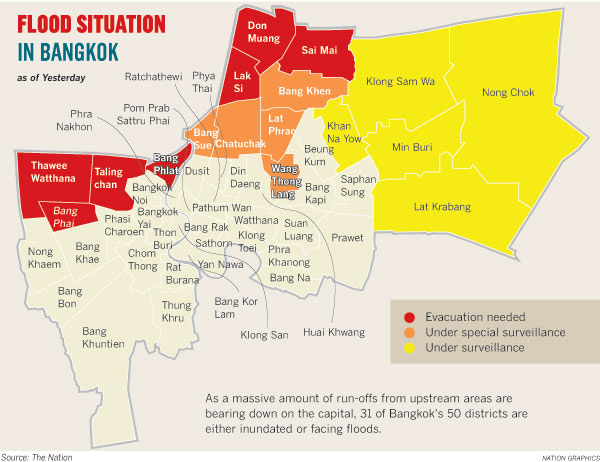 Weeks of flood threats during one of Thailand’s most destructive monsoon seasons on record have given residents in the capital of more than eight million people time to prepare for the worst.

But that extra time also allows for uncertainty, mixed messages, and “warning fatigue”, complicating how well people prepare and, ultimately, how many lives and livelihoods are spared, say disaster workers and researchers.

said Jerry Velasquez, senior regional coordinator for the UN International Strategy for Disaster Reduction (ISDR) Asia Pacific. He likened the run-off from flooding in the north winding southwards to a “slow tsunami”.

When the government first reported potential flooding in parts of Bangkok in early October, some residents built flood walls. Others did little more than stock up on bottled water. When warnings escalated to include all 50 city districts, thousands packed bus terminals to leave the city, while others ignored the evacuation calls.

How people decide whether, how and when they prepare for a disaster is complicated, and in a slowly unfolding one such as in Bangkok, it is often made amid uncertainty and conflicting messages, said Douglas Paton, a psychology professor at Australia’s University of Tasmania.

“Nobody can say a flood with this amount of water will reach this suburb at 3:47pm and at a height of 1.2m,” he said. “Things are much more vague.”

Warnings generally stoke anxiety that cause people to act, Paton said. But weeks of alarm-raising without any calamity can cause distrust. “That anxiety means we take an instant dislike to the people who have created this bad feeling,” he explained.

People tend to give more weight to positive messages, particularly when predictions prove inaccurate and their personal experiences do not give them reason to fear, Paton said.

Residents in Bangkok have received numerous warnings from the national government through its flood relief operation centre and the city’s metropolitan authority, which have each issued varying predictions of flood damage.

Central Bangkok was mostly dry during the recent high-risk period, but surrounding areas have been submerged in run-off water from the north that is testing the city’s dams and waterways. Most of Thailand has been affected in this year’s monsoon, with 26 of the country’s 76 provinces still flooded, and more than 100,000 people displaced.

Saranya Sonthiratana, 44, lives 25km north of central Bangkok in Nonthaburi Province, where stretches of homes sit in 1m of water. The threat had been abstract – until her pipes burst.

via IRIN Global | GLOBAL: The risk of “warning fatigue” in disaster preparedness