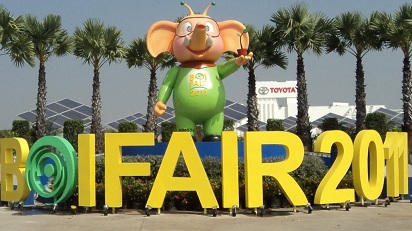 Thailand’s Board of Investment (BOI) today officially opened the BOI Fair 2011, scheduled through Jan 20 at the Impact Muang Thong Thani exhibition centre, marking the end of the massive flood crisis, and the drive to full recovery.

Held under the theme “Going Green for the Future”, the fair not only aims to showcase high technology and innovations but also to stimulate economic activity, rebuilding investor confidence in Thailand after last year’s massive flood.

The recent flood crisis led to postponement of the BOI Fair 2011, part of the celebration on the auspicious occasion of His Majesty the King’s 84th birthday on 5 Dec 2011 and to highlight the country’s potential as an investment location.

Minister of Industry Wannarat Channukul said earlier that the BOI Fair 2011, BOI’s third fair, would be a significant event that not only showcases advanced technologies, enhances the country’s image and promotes investment opportunity in Thailand, but also would serve as a platform for Thais to show the power of love and harmony that will move the country forward after the flood catastrophe.

The BOI Fair 2011 covers an area almost 300,000 square metres, including open-air activities and exhibits in 84 pavilions occupied by some 30 leading Thai and multinational companies with the Royal Pavilion as the main highlight.

Outdoor activities arrayed around the lake will showcase technological achievements and innovations by BOI-promoted foreign and Thai companies, showing the potential for the future.

In addition, there are indoor exhibitions held in Impact’s Challenger 1-2-3 areas, Hall 9 and other special activities, including a CEO Forum, and more than 200 seminars.

It includes exhibits by the Ministry of Industry, tourism promotion activities, exhibits organised by embassies and chambers of commerce, and displays of selected products that are outstanding examples of applied traditional Thai wisdom.

The Challenger 1-3 buildings also offer various products for sale. Exhibitions focus on Thailand’s successes and potential, ranging from agriculture to industry and service.

BOI Secretary-General Atchaka Sibunraung said she believed that some 5 million people will visit the fair, 310,000 daily visitors on average.

BOI Fair 2011 to Host “Save Our Planet” Conference

As part of the activities of BOI Fair 2011, the Board of Investment (BOI) will host the 5th Save Our Planet conference, the fifth in a series of forums addressing the challenges of global warming and reducing humanity’s carbon footprint. By holding this conference at BOI Fair 2011, the event organizers are hoping to reach out to Thai people and focus on environment issues in Thailand.

At the press conference that was held in early December, Vasana Mututanont, executive director of the BOI’s International Affairs Division, said that BOI was pleased to have Save Our Planet 5 as part of BOI Fair 2011, as it was in line with the fair’s theme, Going Green for the Future.

“The BOI expects eco-friendly business and investment to flourish in coming years, driven by concerns relating to climate change. While investment in Thailand now focuses on renewable and alternative energy, attracting projects in green technology, such as recycling, reuse and efficient energy consumption, is a priority activity under the BOI scheme. As such, the BOI provides maximum incentives for existing factories and service providers who wish to shift to energy-saving equipment and lower their greenhouse gas emissions.”

“People around the world have clearly witnessed the impact of climate change such as the tsunami and widespread flooding,” she said. “Many who have ignored it for a long time may now start to realise that everyone should be concerned with this issue.” The conference’s theme of “Air-Water-Earth” could not be more timely, as Thailand is recovering from its worst flooding in half a century.

“We view the flooding crisis as an investment opportunity in the green business sector,” Ms Vasana said, “and we firmly believe that events such as Save Our Planet 5 can help stimulate investment in green industries in Thailand.”