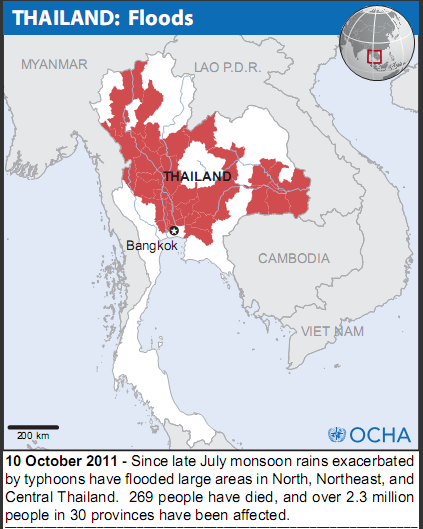 Titled “Cities and Flooding: A Guide to Integrated Urban Flood Risk Management for the 21st Century”, the book provides operational guidance on how to manage the risk of floods in the face of urbanization, growing populations and long-term climate change trends.

“But rapid urbanization also means we have the opportunity to do things right the first time, so cities and towns can support sustainable development, saving lives and money.”

Floods are the most frequent among all natural disasters, and the East Asia and Pacific region, along with South Asia, is particularly vulnerable.

In the past 30 years, the number of floods in Asia amounted to about 40 percent of the total worldwide. More than 90 percent of the global population exposed to floods lives in Asia.

The World Bank has suggested flood guidelines for Thailand for flood prevention and management as a method of managing expanding cities and a growing population.

As developing countries in the region transition to largely urban societies, the concentration of people and assets has made urban flooding increasingly costly and difficult to manage. In addition to direct economic damage, floods also have long-term consequences such as loss of education opportunities, disease and reduced nutrition which may erode development goals.

According to the guidebook, the most effective way to manage flood risk is to take an integrated approach which combines both structural and non-structural measures.

The World Bank has suggested flood guidelines for Thailand for flood prevention and management as a method of managing expanding cities and a growing population.

The key is getting the balance right, says the guidebook. While hard-engineered structures are effective when used appropriately, they can be overcome by natural disasters beyond their design capacity. They may transfer flood risk, reducing risk in one location only to increase it in another.

Web-based flood forecasting systems are an effective way to disseminate hydrological and hydro-meteorological data to a range of users. Mapping risk and vulnerability can be invaluable in directing resources appropriately to protect people.

For example, the World Bank is working with partners to support meteorological services in the Lower Mekong Basin. This will assist cities in Vietnam and Indonesia develop a medium term resilience plan that takes into account the uncertainties and risks from natural hazards.

Communications also plays a significant role in raising awareness and reinforcing preparedness. The guidebook warns that less severe disasters can be forgotten in less than three years.

As flood risk cannot be eliminated entirely, planning for a speedy recovery is also necessary, using reconstruction as an opportunity to build safer and stronger communities which have the capacity to withstand flooding better in the future.

“Recent large-scale disasters such as the earthquake and tsunami in Japan and the floods in Thailand and Australia emphasize the need for a new approach to disaster risk management and resilience,”

“We need to design systems that recognize the complex and uncertain nature of flood risk management and its impacts. Design should be comprehensive, flexible and iterative, being careful to avoid an over-reliance on any one given solution which may not be enough to counter the dynamic nature of risk.”

Related Topics:floodingworld bank
Up Next

Plants-based plastics could be the next environmental hit