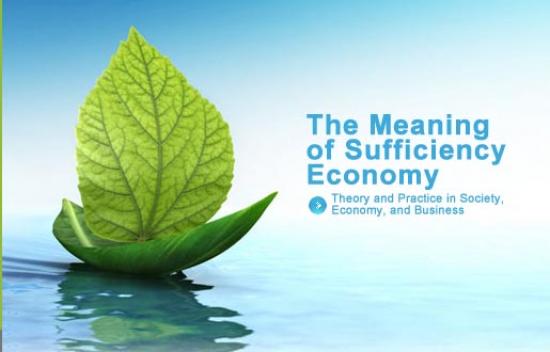 Secretary-General of the United Nations Conference on Trade and Development (UNCTAD), Dr. Supachai Panitchpakdi, has urged every nation to build self-reliant and well-managed economy or Sufficiency Economy, so as to tackle and solve economic problems.

The call was part of Dr. Supachai’s opening keynote address under the theme “Sufficiency Economy and the Direction of Sustainable Development,” at the Meaning of Sufficiency Economy International Conference, held on 16-17 February 2012 at Plaza Athénée Hotel in Bangkok.

The Sufficiency Economy is meant as a development alternative based on an attitude toward life that encompasses three components, namely moderation, reasonableness, and self-immunity.

He also stressed that not only poor countries but also rich ones should adopt the Sufficiency Economy, and that charity donations or financial assistance are not the best solutions.

A number of people from various fields, both in Thailand and from overseas, gathered at the international conference, organized on the occasion of the celebrations on the Auspicious Occasion of His Majesty the King’s 7th Cycle Birthday Anniversary on 5th December 2011.

The primary purpose of this conference was to explore the state of research and practice of the sufficiency philosophy on various levels. It also encouraged academics and development actors from relevant theoretical backgrounds to share their experiences and express their views on Sufficiency Economy, in order to further develop cooperation in the near future.

Thailand is applying the philosophy of Sufficiency Economy, advocated and developed by His Majesty the King Bhumibol Adulyadej, to national administration and all fields of development. This philosophy has become the country’s approach to development strategies and policies.

The Sufficiency Economy is meant as a development alternative based on an attitude toward life that encompasses three components, namely moderation, reasonableness, and self-immunity.

via Around Thailand — International Conference on Sufficiency Economy in Bangkok.

Since HM the King introduced the idea of ‘sufficiency economy’ in his birthday address in December 1997, the idea has gained currency among Thailand’s political institutions, academics, and the wider public. The rapid circulation of sufficiency economy owed much to the experiences and disillusionment during the unfolding Asian economic crisis in the same year.

However, the meaning of the philosophy remained unclear to many for years following the speech. Its features gradually took shape after the adoption of sufficiency economy as Thailand’s national development paradigm. The UNDP Report on Thailand in 2007 aimed to outline the concept more clearly by citing the application of the philosophy in various societal sectors, namely the grassroots level, business, and the national economy.

Sufficiency economy, taking form through the contributions of various institutions and academics, has seen a wide range of interpretations of its aim and origins, as well as different views about its application. Today there is widespread agreement that sufficiency economy is meant as a development alternative based on an attitude towards life that encompasses three components: moderation, reasonableness, and self-immunity.

Questions however remain, such as: What makes sufficiency economy different from other development alternatives, notably those that stress sustainability and empowerment of communities? Is it applicable by all the actors as are cited in the UNDP Report? To what extent can it be incorporated in a country firmly integrated in the globalized economy?

Plants-based plastics could be the next environmental hit