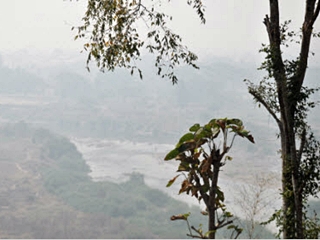 The haze situation in the northern province of Chiang Rai, particularly Mae Sai district, remains critical as dust particles in the district on Tuesday registered as the highest level in the region at almost 300 micrograms per cubic metre.

Thailand’s standard of dust particle safety measures 120 micrograms per cubic metre or less. The smog has covered most of the province causing poor vision, particularly along the Phaholyothin-Chiang Rai Road which forces drivers to turn on their headlights of their vehicles and to drive with more caution.

Mae Sai district, on Tuesday registered as the highest level in the region at almost 300 micrograms per cubic metre. Picture: MCOT news online

The authorities in Chiang Rai plan to dispatch workers to spray water into the air to ease the dust particle level, and more measures will be considered to tackle the problem caused by seasonal forest and farmland fires.The Northern Royal Rainmaking Centre launched its first operation on Monday to make artificial rain to fight haze and drought in the northern provinces.

The haze has put many residents at risk from respiratory ailments.

According to the Chiang Rai public health office, between Jan 1 and Feb 20, 43,316 patients experienced respiratory ailments and were treated at hospitals in the province. MCOT online news

Agencies concerned are working to bring the haze pollution problem in northern Thailand under control. They are also monitoring the situation closely and providing assistance to local people.

The Ministry of Public Health has sent 50,000 sanitary masks to the eight provinces so that local residents could protect themselves from haze pollution. Around 60 hospitals in these provinces reported that the number of patients suffering from heart, coronary, respiratory, and eye diseases has been on the rise. However, the report did not conclude that the smoke haze was a factor contributing to the increase. Public Health Minister Wittaya Buranasiri said that he would send occupational and environmental health experts to the areas to gather information for disease control and surveillance.

pollution problem was among the top priorities for Chiang Mai officials

Chiang Mai Governor Mom Luang Panadda Diskul said that the haze pollution problem was among the top priorities for Chiang Mai officials; they would work to mitigate adverse effects for the time being. The problem would not only cause health hazards, but would also harm the tourism industry. Stressing the need for local people to reduce burning, the Governor has instructed officials to impose strict measures to prevent people from burning on farms and in forest areas.

Statistics compiled by the Chiang Mai Disaster Prevention and Mitigation Office show that 162 forest fires took place in the province between 5 January and 15 February 2012. Almost 400 acres of forest land, mainly in Hot, Mae Chaem, and Doi Tao districts, have been damaged.

A study indicates that the smoke haze and bushfire problem usually arises in Thailand from January to April each year. It is caused by all kinds of burning in various communities, as well as the slash-and-burn farming technique employed by farmers. Dust and smoke particles from haze pollution cause air pollution and health hazards, particularly respiratory illness. Artificial rain-making has been adopted as one way to help ease the problem. Campaigns are launched each year to encourage local people ton fight the problem by refraining from burning during this period.

Several other ASEAN countries also face this problem each year. ASEAN ministers responsible for the environment have agreed to set up a fund to provide immediate assistance for affected countries. At their latest meeting in Phnom Penh, Cambodia, on 18 October 2011, the ministers noted that several ASEAN Member States had contributed to the ASEAN Transboundary Haze Pollution Control Fund towards realizing the pledge of providing an initial seed contribution of 500,000 US dollars for the Fund. Thailand has also cooperated with Lao PDR and Myanmar in providing air quality monitoring stations to fight the problem in the region.