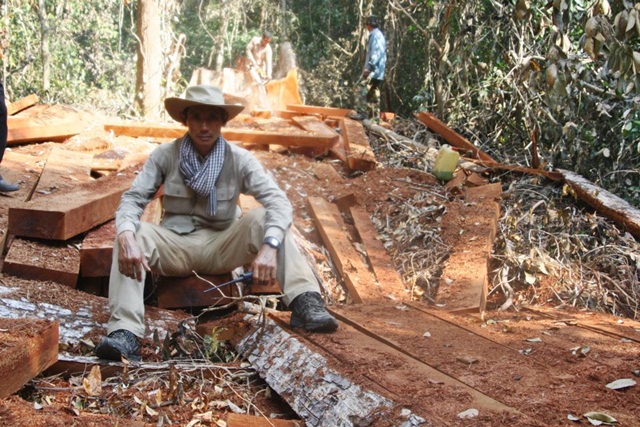 The director of a well-known Cambodian environmental organization seeking to highlight government negligence and corruption over illegal logging was gunned down by military police on April 26. Chut Wutty, director of the Natural Resource Protection Group, was shot and killed in a car after he refused to hand over his camera’s memory card to the policeman. He had been escorting two journalists from a local newspaper in a protected forest in Koh Kong Province, site of an illegal logging operation said to involve military officials.

Illegal logging has been a hot topic in Cambodia in recent months. It’s a practice that has expanded as it has become more profitable – there’s significant international demand for the fine-grained lumber from rosewood trees, which is used in a wide variety of ways, from the production of furniture in China to musical instruments to be sold in the United States.
However, activists say the logging of …
Read More…

Reporters Without Borders strongly condemns the action of the Cambodian military police in detaining two journalists from theCambodia Daily, Phorn Bopha et Olesia Plokhii, after an incident on 26 April in the south-western province of Koh Kong in which the environmentalist Chut Wutty, who was their local guide, and a policeman were killed.

“We offer our condolences to the family and friends of Chut Wutty,” Reporters Without Borders said. “It is not acceptable that the matter should be regarded as closed so soon afterwards. The Cambodian authorities must conduct an investigation to clarify an incident that led to the death of someone who worked closely with news organizations.

“The right of access to the region for the press and environmental protection organizations should be guaranteed. The reason for intervention by the police should be determined — it could well have been in response to a request from a private company.

“We are concerned that members of the security forces can be used as a private militia to get rid of ‘awkward’ observers.”

The two women journalists, Phorn Bopha, a Cambodian, and Olesia Plokhii, a Canadian, arrived at a checkpoint in late morning after visiting a protected area of forest at Veal Bei in Koh Kong province. They were believed to have gone there to report on wine production accompanied by Chut Wutty, who is well-known in Cambodia for his activism.

In Kong Chit, the provincial coordinator for Licadho, said one policeman, named as In Rattana, shot Chut Wutty as he tried to start his car to drive away, killing him instantly. The exact circumstances of the deaths are still vague, however several newspapers quoted Chut Wutty’s wife as saying she believed her husband was targeted because of his work.

The two journalists were detained for questioning by the Koh Kong military police and released on 28 April. Phorn Bopha suffered a slight injury to the mouth. The women’s three cameras were seized by the authorities. At least some of the equipment was later returned to them.

As reported in thePhnom Penh Post, it was not the first time that Chut Wutty, the director of the Natural Resource Protection Group, had accompanied journalists visiting protected areas of forest. Last December, he was arrested several times and asked after escorting the Phnom Penh Post to protected forest areas.

He also received threats because of his criticism of the role of the government and armed forces in several cases of illegal logging and land seizures.

Police spokesman Kheng Tito said the police officer was believed to have shot Chut Wutty before killing himself and that, in these circumstances, further investigation was unlikely.

He also said the presence of military personnel was requested by the company MDS Import Export to prevent photographs being taken in the area, where it is carrying out tree felling in preparation for the construction of a hydro-electric dam by the Chinese firmChina National Heavy Machinery.

According to Ou Virak, president of the Cambodian Center for Human Rights, local officials could not be trusted to conduct an impartial investigation when military police officers were accused of being involved in the shooting.

Journalists visiting protected natural zones in Cambodia, in particular those who report on illegal logging, are regularly subjected to threats from private companies.

In 2007,Lem Piseth, a correspondent for Radio Free Asia, was forced to flee to Thailand after receiving threats over his investigation into damage from deforestation in the centre of the country. In 2010, Reporters Without Borders published a report on attacks on journalists who write about damage to the environment.