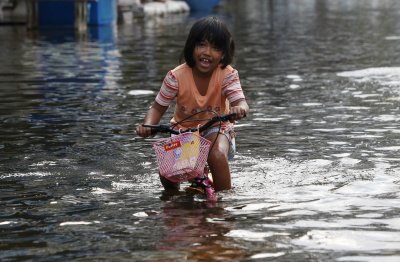 From floods to bombs to financial crises, participants at the World Economic Forum on East Asia engaged in a lively debate on how the region can improve its resilience to a varied set of risks. Supporting economic growth, participants agreed, was a key part of risk management:

“If you have a strong and solid economy, that is the foundation for you to have the means to deal with shocks,” said Idris Jala, Minister at the Office of the Prime Minister of Malaysia,

adding that ASEAN countries should focus on six to ten sectors each to build expertise and fuel growth.

Inevitably, the discussion turned to the financial crisis which continues to rage through the Eurozone. Although East Asia was not considered particularly exposed, given that its economies are still weighted towards domestic demand, “we will feel an impact,” Idris Jala said. However, there was arguably some reassurance on this front from Naoyuki Shinohara, the Deputy Managing Director of the International Monetary Fund.

“We do not expect the euro to break up…. We do not expect Greece to exit the Eurozone,” he said, arguing that such a move would be very costly for the beleaguered country.

The situation would be clearer after the national election there in June, he added.

As East Asian countries continue to grow, they face a paradox: greater wealth may bring a greater ability to mitigate risks, but it also creates greater exposure to risks, given the increasingly interconnected nature of financial markets. Geoff Riddell, Regional Chairman of the Zurich Insurance Group, highlighted the “heavily interconnected” nature of today’s risks, and the importance of the Risk Response Network’s Global Risk Report in mapping them.

In terms of tackling risks, a variety of approaches were put forward. Jane Harman, Director, President and CEO of the Woodrow Wilson International Center for Scholars, USA, said that there had to be better cooperation between the public and private spheres, stating that poor communication between the two had hampered the response to hurricane Katrina. What’s more, she said: “Resilience requires getting the public in different countries prepared. Decisions have to go down to the grass roots level.”

In a World Economic Forum Facebook poll on how East Asia can improve its resilience to risk, the majority of respondents selected “improving access to quality education”, followed by “urban planning and investment in infrastructure.”

Idris Jala, meanwhile, called for greater cooperation on a regional level. “ASEAN countries need to come together and list the major shocks, then provide a framework and money,” he said. Businesses tended to move faster than governments in preparing for risks, argued Emirsyah Satar, President and Chief Executive Officer, PT Garuda Indonesia. Masami Yamamoto, the President of Fujitsu and a Co-Chair of the World Economic Forum on East Asia, highlighted Japan’s role in providing innovations to help the “economic rebound”.

In a region frequently afflicted by natural disasters, including last year’s severe flooding in Thailand, Geoff Riddell provided some sobering perspective. “However much preparation is done, nature can overwhelm us.”

You can watch a video of the session here, or read our press release here.

Pictured: A girl rides her bike through a flooded street on the outskirts of Bangkok, in November 2011 (Reuters)

The Blossoming of Doi Tung | The World Economic Forum