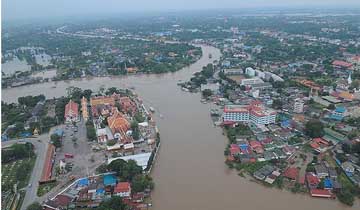 BANGKOK, 7 June 2012 (NNT) – Continuous rain has caused flooding in five districts in the southern province of Surat Thani, affecting 8,500 households and over 27,000 residents. Assistance from the military has been sent to the flooded areas.

On Thursday, rain fell all day in Surat Thani in all areas, making the Phum Duang River overflow and flood a nearby community, with the water level as high as 2-3 meters. The affected residents have been evacuated. Water and dry foods have been handed out to them by army officers.

Continuous rain has caused flooding in five districts in the southern province of Surat Thani, affecting 8,500 households and over 27,000 residents

As for Vibhavadi district which has been flooded since Wednesday, the flood water has decreased from 3-5 meters high to 1-2 meters. The situation is expected to return to normal soon. Inundation, flash flood, landslide and gust are expected in Surat Thani from 5-8 June 2012. The province has set up a special disaster relief center and urged people in the disaster-prone areas to closely monitor the situation. Read More

According to the Prime Minister’s secretary-general, Ms Yingluck and her cabinet ministers are set to kick off an inspection trip in the central and southern regions as part of the government’s efforts to review the flood solving progress.

PM’s secretary-general, Suranand Vejjajiva, said that the premier will first begin her tour in Ayutthaya province, which sustained the most damage in last year’s flood crisis. She is scheduled to continue to other downstream provinces, as well as mid-stream and upstream provinces.

On June 8, Ms Yingluck plans to travel to Nonthaburi province to follow up on the payment of flood compensation after a number of residents have filed complaints of payment discrepancy.

Mr. Suranand added that Ms Yingluck has also instructed Natural Resources and Environment Minister, Preecha Rengsomboonsuk to visit currently flooded provinces in the South to provide further assistance. If her schedule allows, the premier is also planning to travel to Chumphon province in the upper South on June 8 to visit affected residents.

As for today, the premier spent this morning shooting two TV commercials, one taken at the Government House to promote the Tourism Authority of Thailand’s campaign “Miracle Year of Amazing Thailand” and the other at the Ministry of Public Health to promote the state emergency health project.

What a Waste: A Global Review of Solid Waste Management