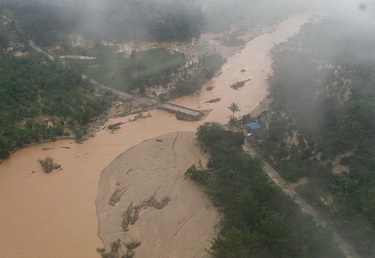 There is no risk of a mega flood this year if the rainfall level is normal, according to a meteorological department forecast, while two major dams will not overflow, said a senior official of the Royal Irrigation Department.

Mr Suthep Noipairoj, Deputy Director General of the Royal Irrigation Department, affirmed that the two major dams – the Bhumibol dam and the Sirikit dam – are capable of retaining more water and that reserve water is adequate for crop cultivation in the central region.

However, he conceded that low-lying areas in Ayutthaya and Ang Thong are likely to be submerged as is a normal occurrence every year.

Nevertheless, residential, commercial zones and industrial estates will be safe from flooding, he added.

via Irrigation Dept confident of no mega flood if rainfall normal.

The Thai government is inviting both Thai and foreign experts to help seek effective ways to deal with potential flood situations and handle water management in Thailand on a sustainable basis.

The National Water Resources and Flood Policy Committee, chaired by Prime Minister Yingluck Shinawatra, had approved the terms of reference of the project before the Prime Minister and Cabinet members began an inspection tour of eight provinces from 11 to 14 June 2012 to follow up on the progress of flood prevention measures.

The terms of reference were part of the Government’s comprehensive flood prevention plan to create a new and improved water and crisis management system.

The Minister of Science and Technology, Plodprasop Suraswadi, stated that, according to the terms of reference, consulting companies all over the world were invited to propose a conceptual plan on water management in Thailand. The invitation would be sent through various embassies, and bidding would open one month after the Cabinet approved the terms of reference on 12 June 2012. After that, three companies will be selected and allowed to work for three months.

Mr. Plodprasop said that the National Water Resources and Flood Policy Committee would spend one month on considering their performance before the next phases of working out detail designs and starting construction work. He pointed out that the project is meant to save Thailand from floods and drought and to increase the efficiency of water management in the country.

He said that, in principle, the proposed flood management plan must take into account His Majesty the King’s advice on water management. His Majesty has advocated a balance in both conservation and development and a holistic approach to water resource management, with measures to handle water from its origin as a droplet to the last drop released back into nature.

The plan, he said, must also respond to the master plan for water resources management approved earlier by the Strategic Committee for Water Resources Management. The master plan is aimed at improving the existing flood prevention system, building confidence in flood prevention in communities, agricultural areas, industrial sites, and important economic zones, and integrating the participation of stakeholders from all sectors for effective water management. It was drawn up after the flood crisis in Thailand in 2011 and involves short-term and long-term plans covering 25 river basins across the country.

Managing the world’s most precious resource