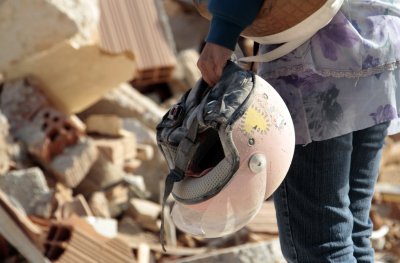 Escaping the stifling heat and humidity of a Manhattan heatwave for the cool, forested campus of Columbia University’s Earth Institute up river on the Hudson was a welcome relief. But that respite was short-lived as I found myself in a classroom with World Economic Forum Global Leadership Fellows discussing another natural hazard – earthquakes.

While the intention was not necessarily to scare us, Jim Gaherty, a seismology professor at the Earth Institute who studies the depths of the planet to gain a better understanding of shifting tectonic plates, calmly informed us that there are thousands of moderately big earthquakes each year (according to the US Geological Survey, there were 2,477 earthquakes in 2011 with a magnitude of 5 or above on the Richter scale). In fact, a strong 6.4-magnitude earthquake struck off the west coast of Indonesia’s Sumatra Island as I was writing this blog.

Escaping the stifling heat and humidity of a Manhattan heatwave for the cool, forested campus of Columbia University’s Earth Institute up river on the Hudson was a welcome relief.

Although not all earthquakes cause loss of life and damage, it’s not so easy to forget the mega-events, such as the 2010 Haiti earthquake and 2011 Japan earthquake and tsunami, to be reminded of the dangers – or natural processes – that lurk below ground.

But, we only need to worry about the big ones, right? Wrong, says Gaherty. There is a very poor correlation between an earthquake’s magnitude and human deaths, and a similarly poor correlation with economic loss. Earth is a dynamic system with a lot of complexity, and while technology and research are helping to map seismic-hazard maps, predicting and quantifying the actual impact of an earthquake is still not an exact science. But with further scientific information, good risk scenarios and political will, mitigating some of the danger is possible.

According to Arthur Lerner-Lam, Deputy Director of the Earth Institute’s Lamont-Doherty Earth Observatory, who spoke to us about earthquakes and risk reduction, people will be exposed to natural hazards at some time in the future – it’s not a question of if, but when and where. That’s why disaster resilience is becoming a call to action.

While the World Economic Forum is not in the business of science, it is in the business of bringing together as many stakeholders as possible – scientists, governments, NGOs and the private sector – to map, monitor and mitigate global risks. This is the work of the Forum’s Risk Response Network – to facilitate a collective response to complex and interconnected global risks, be it environmental like an earthquake or other risks such as economic, geopolitical, technological or societal.

In the most recent edition of the Forum’s Global Risks 2012 report, a special section is dedicated to the important lessons learned from the 2011 Japan earthquake, tsunami and subsequent nuclear crisis at Fukushima. Lessons focus on the role of leadership, challenges to effective communication and resilient business models in response to crises of unforeseen magnitude.

More than one year on, the images of that day on 11 March 2011 are still clear: at 14.46 a 9.0-magnitude earthquake struck the Tohoku region of north-eastern Japan, causing a tsunami that hit the country’s coastline within half an hour. Waves estimated as high as almost 40 metres (roughly 16 storeys) inundated an area of more than 500 square kilometres, taking the lives of over 15,800 people and ruining the lives and livelihoods of thousands of others.

What can we learn from the Great East Japan Earthquake?

Mostly importantly, the flexibility and resilience in response structures, the benefits of systemic resilience that consider multiple hazards, the need to distribute responsibility across society rather than leaving it only with the public sector, and the value of understanding how human-made systems can amplify or minimize the risks of natural disasters.

Trying to rise above the doom and gloom of a future with increased natural hazards, Global Leadership Fellow Abigail Noble asked a rather unconventional and thought-provoking question. Are there any benefits associated with earthquakes? While there seem to be no obvious benefits (no science fiction-like technique as of yet has been invented to harness the massive energy that earthquakes release), there are massive benefits for preparing for the worst – saving lives.

Mark Schulman is Editor at the World Economic Forum USA