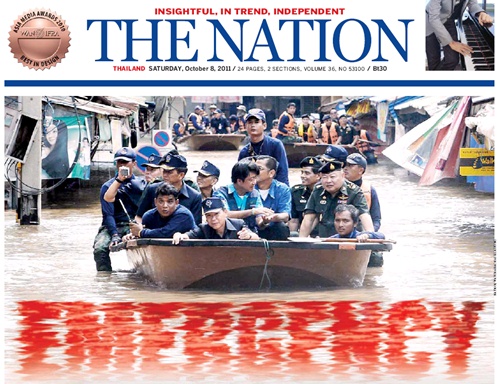 When Adri Verwey, a Dutch flood expert, arrived in Thailand in early October last year, the country was struggling to prevent a wall of water from flowing southwards to Bangkok. It was also struggling against itself. Government departments were working alone – even sometimes against each other – and in charge was a weeks-old administration led by a relative unknown in Yingluck Shinawatra trying to protect the opposition-run capital.

“There were these political problems,” says Verwey, a consultant with Deltares, a Dutch institute specializing in flood solutions. Contacted by Thai authorities through the Dutch Embassy in Bangkok, Verwey was soon taking charge of crisis meetings involving the new prime minister, the army and numerous ministries as they tried to plug leaking dykes and flush water out to sea via poorly maintained flood channels.

via Can Thailand Avoid Becoming a Modern-Day Atlantis? | The Diplomat.