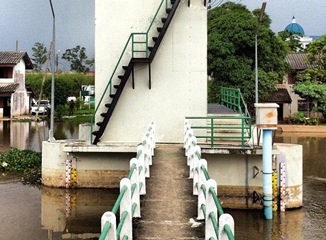 The Royal Irrigation Department has coordinated with the Bangkok Metropolitan Administration to drain water from Bangkok’s eastern canals into the Bangpakong River and the Gulf of Thailand in preparation for heavy rain in the next few days as forecast by the meteorological department.

Surat Thanusilp, a senior official of the irrigation department said a large amount of water is now in Bangkok’s eastern canals as it holds the northern run-off of about 16 million cubic metres per day and rainfall of 300-400 millimetres per hour in the area.

About 900,000 cubic metres of water have been drained through Saen Saeb canal and Prawet canal to the Rama IX giant drainage tunnel and the Prakhanong pump water station.

He said the volume of northern run-off has dropped and the situation should return to normal if there is no more rainfall. However, more rainfall could cause flooding at some canal-side areas outside the flood prevention dyke.

via Water in Bangkok’s eastern canals drained to prepare for more rainfall.