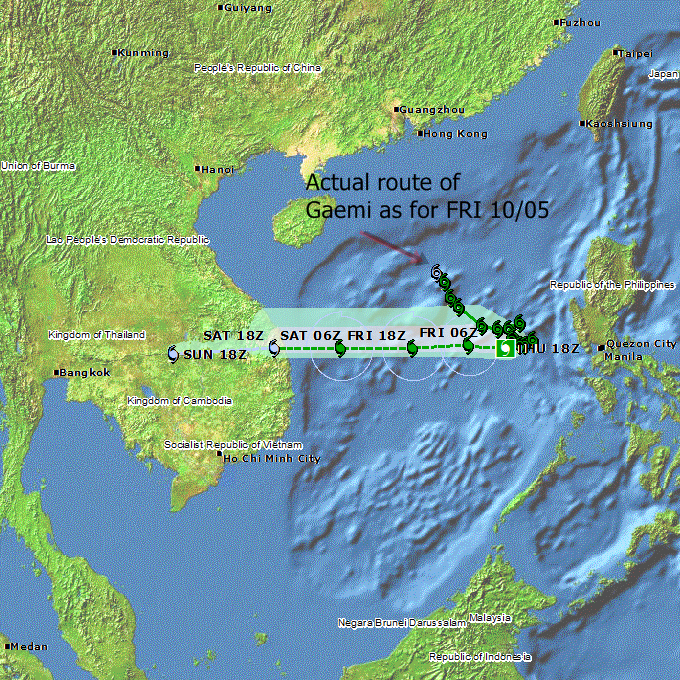 Prime Minister Yingluck Shinawatra gave assurances today that Thailand is well prepared to deal with the consequences of tropical storm Gaemi which is forecast to move over the kingdom after passing across Vietnam and Laos on Saturday.

The Thai Meteorological Department Thursday at 4.30pm said the storm will pass the lower Northeast and Central Thailand, bringing heavy rain, complicated by the stronger southwest monsoon prevailing over the Andaman Sea, the South and the Gulf of Thailand which will cause torrential rain in many areas, and winds over the Northeast and the East first, followed by the lower North, the Central and the South, west coast from Friday through Monday.

The actual route of Gaemi is now heading North according to Pacific Disaster Center latest map, which could be good news for Thailand, and especially Bangkok

Bangkok Governor MR Sukhumbhand Paribatra said the BMA can handle the impact of Gaemi and added that he did not expect the capital to be heavily flooded.

“If rainfall is no more than 100 millimetres, some areas will be flooded to only 30 centimetres high and the water can be drained in one day,” the governor said.

The weather bureau also forecast another storm, Phrapiroon, over Thailand after Gaemi. It is reportedly gaining strength in the South China Sea.

Ms Yingluck said the Interior Ministry’s Department of Disaster Prevention and Mitigation has worked closely with the Bangkok Metropolitan Administration (BMA) to assure that flood water will be immediately drained away, while pumps have been installed in various locations in Bangkok.

She said her government is willing to work with the capital’s opposition Democrat-led municipal government (BMA) to prevent flooding and solve the people’s problems despite the fact that many areas are under separate jurisdiction.

The Meteorological Department has forecast more rain and possibly strong winds in other parts of the country on the weekend when the storm enters Thailand from Vietnam and Cambodia before it leaves the country on Monday. Other affected areas will be the central region and southern provinces, it added.

Hospitals in the provinces expected to be hit by the storm, including Chanthaburi, Trat, Sa Kaeo, Prachin Buri and Nakhon Ratchasima, have been told to prepare for an emergency situation and ordered to stay alert around the clock from Friday, according to Public Health Minister Witthaya Buranasiri.

In Bangkok, the BMA’s drainage office has prepared five million sandbags for the worst case scenario and worked with the Royal Irrigation Department to help push water in all canals close to the capital out to rivers and the Gulf of Thailand. City Hall has drained water in all canals in the inner part of Bangkok.

The second storm has been named Phrapiroon, and is forecast to follow almost directly in the footsteps of Gaemi _ hitting the lower Northeast, East, Central region and upper South of the country.

Government agencies are racing to prepare for the storms and to assure the public that they will be safe from flooding.

The storm is expected to bring heavy rains to Thailand’s lower Northeast and Central regions starting from today until Monday.

Mr Sukhumbhand stressed the need for BMA staff to work closely with officials from the Royal Irrigation Department. He said sluice gates at canals in the city have now been raised to help with drainage, and that BMA officials will meet at the Drainage and Sewerage Department to monitor the situation.