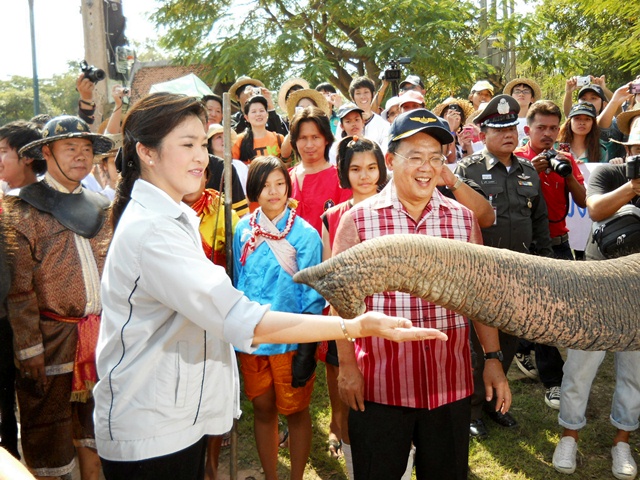 The Thailand Elephant Conservation Centre TECC in the northern province of Lampang held a variety of activities marking the National Elephant Day today.

Nipakorn Singhabhudathangkoon, head of the National Elephant Institute of the Forestry Industry Organisation, presided over the ceremony to give alms to nine monks at the elephant centre in Hang Chat district. Staff from the TECC led 50 elephants to join the merit-making ceremony as mahouts had prepared food in large baskets and let the elephants present them to the monks.

The monks sprinkled lustral water over the elephants as numbers of tourists and local residents joined the event taking photos of the memorable moments with the pachyderms.

Other good luck ceremonies were also held for the elephants, with a spectacular elephant parade in traditional northern Lanna style before the feast for 50 elephants. Special treats with many kinds of fruits such as banana, pineapple, melon, and sugar cane were set in a large wooden tray or Stoke Chang.

The activities at the elephant centre were free and tourists had up close experiences with the pachyderms to raise awareness about elephant conservation and to campaign against the illegal ivory trade. According to the TECC, Thailand’s elephant population has dramatically declined from more than 50,000 wild and domesticated elephants to around 5,000 over the past three decades. MCOT online news

Thai Prime Minister Yingluck Shinawatra pledged to start a legislative process to end ivory trade in Thailand, seizing a key opportunity to stem global wildlife trafficking at the opening of the Convention on the International Trade in Endangered Species of Fauna and Flora (CITES) in Bangkok.

Her statement came after a petition calling on Thailand to ban its ivory trade was signed by nearly 1.5 million WWF, Leonardo DiCaprio and Avaaz supporters. Prime Minister Shinawatra said that Thailand would take steps to end ivory trade – the first time the Thai government has said this publicly.

“As a next step we will forward amending the national legislation with the goal of putting an end on ivory trade and to be in line with international norms,” Prime Minster Shinawatra said. “This will help protect all forms of elephants including Thailand’s wild and domestic elephants and those from Africa.”

The prime minister’s decision comes as WWF and TRAFFIC continue asking CITES governments to sanction countries fuelling the global illegal wildlife trade. Poaching has escalated to crisis levels in recent years, and is a major threat to iconic species such as elephants, rhinos and tigers.

Ending ivory trade in Thailand – currently the world’s largest unregulated ivory market – will go a long way in stemming a global poaching crisis that is leading to the slaughter of tens of thousands of elephants each year and fuelling a global criminal trade in animal parts.

“The fight to stop wildlife crime and shut down Thailand’s ivory markets is not over. Prime Minister Shinawatra now needs to provide a timeline for this ban and ensure that it takes place as a matter of urgency, because the slaughter of elephants continues.”

Thailand, Nigeria and Democratic Republic of Congo have failed repeatedly to address their rampant domestic ivory markets despite CITES rules that outlaw the unregulated sale of ivory. Under treaty rules, CITES member states can recommend that parties stop trading with non-compliant countries in the 35,000 species covered under the convention, from timbers to crocodile skins.