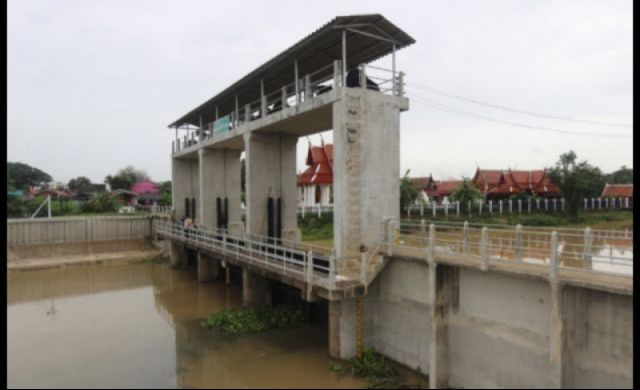 Several  temples in the former Siamese capital have been flooded as irrigation officials closed a major sluice gate to prevent floodwaters from flowing into the town centre and industrial estates.

Water from northern Thailand has flowed into the Chao Phraya and Pasak rivers which merge at Koh Muang Ayutthaya, rapidly raising the water level at Han Tra and Kamang canals.

The two canals zigzag in the province and a water gate is under construction to prevent water from flowing into the eastern part of the province and Rojana district where an industrial estate is located.

The Rojana industrial estate was badly hit by flooding in 2011.Construction of the water gate has been temporarily suspended due to high water and overflowing water in Han Tra and Pai Ling sub-districts.

Irrigation and provincial officials have been on full alert to prevent water from overflowing the sluice gate into commercial areas.In the Ayutthaya districts of Bang Ban, Sena and Phak Hai, officials reported that the water level was 10-15 cm higher and several temples were surrounded by water, some even one metre deep. MCOT online news

China on the Urbanization Warpath