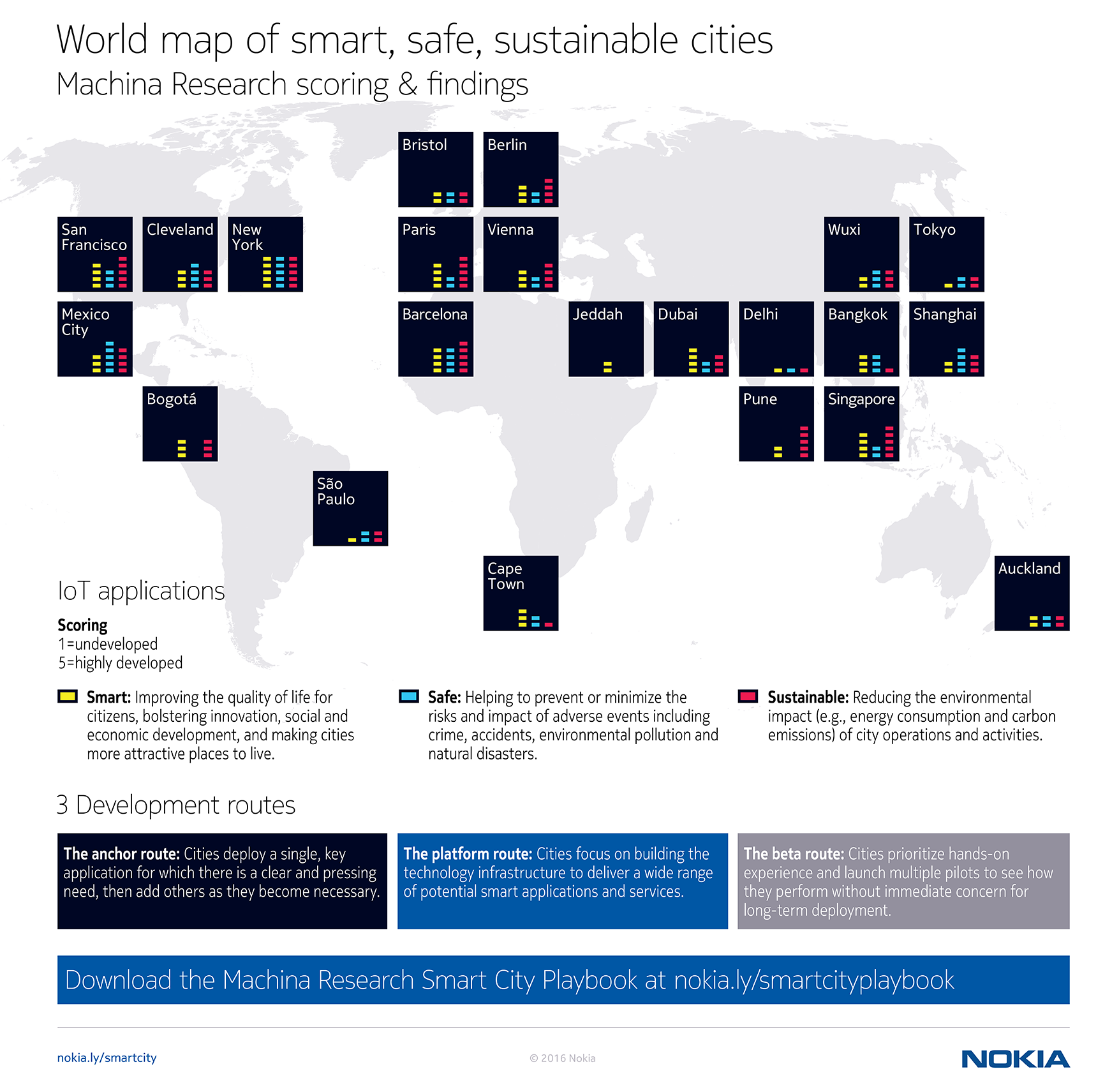 Bangkok has been classified as having moderate development potential for an innovation-driven smart city among top global cities, according to a study released by Nokia.

The Finnish telecom equipment maker analysed 22 cities that are paving the way in smart city investment.

The “Smart City Playbook” study was commissioned by Nokia and conducted by Machina Research.

“Bangkok is still at the beta stage in the drive towards a smarter city,” said Harald Preiss, head of North Asia for Nokia.

Bangkok’s development pace is on par with that of China’s Wuxi, but lags behind advanced cities like San Francisco and New York.

It is expected that 66 percent of the world’s population will live in urban centers by 2050, making it critical for governments and other stakeholders to put strategies in place to more effectively meet the needs of their growing populations.

Intelligent ICT and IoT platforms have essential roles to play in the evolution of smart cities.

The study concluded that many cities are already leveraging these technologies to optimize services and infrastructure, make better-informed decisions, boost economic development, encourage social interactions and make their communities safer and eco-friendly while improving the delivery of a range of public services.

Mr Preiss said Bangkok is classified as a megacity that can leverage technology, particularly the Internet of Things (IoT), to manage city services in a more efficient and smarter way as well as ensure public safety while enhancing sustainability.

Mr Preiss said Bangkok can leverage more advanced technologies through the use of data analytics, augmented reality, the IoT and intelligent systems to further enhance efficiency.

“Bangkok has high potential to exercise full-scale implementation plans for public safety and traffic management — the key priorities for cooperation in the digital economy,” he said.

The study uncovered significant diversity in the smart city strategies of different cities, but identified three distinct ‘routes’ that cities are taking to make themselves smarter. The ‘anchor’ route involves a city deploying a single application to address a pressing problem such as traffic congestion, and then adding other applications over time.

The ‘platform’ route involves building the underlying infrastructure needed to support a wide variety of smart applications and services.

‘Beta Cities’, by contrast, try out multiple applications as pilots to see how they perform before making long-term deployment decisions.

While the study found significant differences between cities, even amongst those cities following the same route, it also concluded that there are several particular practices used by successful smart cities that would appear to be of universal benefit, including:

The study also offers myriad, real-world examples of how various cities are managing challenges including those identified above.