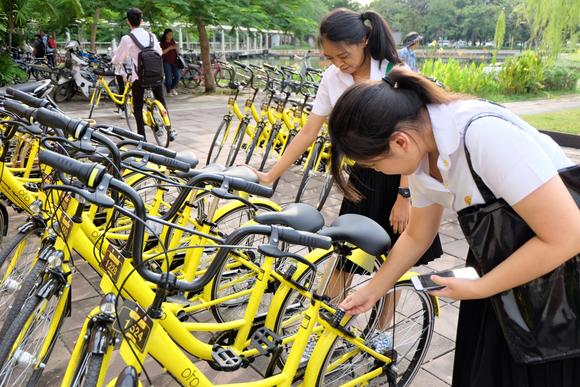 Chinese bike-sharing startups Mobike and Ofo are expanding to several Southeast Asian countries like Thailand and Singapore, betting that the push by local governments to encourage cycling will overcome the region’s structural barriers against the mode of transportation.

At Thammasat University outside of Bangkok, Ofo’s trademark yellow bikes crisscross the sprawling 1.2-million-sq.-meter campus. In August, the school began hosting the company’s limited trial run to demonstrate the benefits of on-demand biking.

The bikes proved to be so popular that Ofo added 400 more of them this month on top of the initial 600.

The bikes are free to use until the end of September, after which it will cost 5 baht (15 cents) for 30 minutes.

“I don’t have to wait for the bus in the hot weather, and they are convenient because you can leave them after you’re done,” said a 19-year-old female college student.

Mobike, officially known as Beijing Mobike Technology, will also soon launch tests of its shared bikes at a shopping center and another college in Thailand.

Bike-sharing, facilitated by smartphone apps that unlock bicycles and accept fees, have taken off in many of China’s metropolises to the point of oversaturation and official freezes on further expansion.

Their first stop was Singapore, which is struggling to deal with traffic snarls. Just 100 days after Ofo launched its service in the city-state in March, the number of users topped 100,000. Mobike, which set up shop in April, has equipped its bikes with tracking functions.

One Belt One Net : SG Tycoon to Invest $5B to Build Data Centre Empire