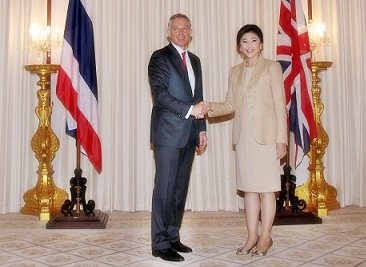 Mr Blair, who was in Thailand as a keynote speaker at the Chief Executive Officer Forum CEO Forum organised by the Board of Investment of Thailand BoI, made a courtesy call on Thai Prime Minister Yingluck Shinawatra at Government House on Tuesday.

Government Spokesperson Thitima Chaisaeng told reporters afterward that Ms Yingluck and Mr Blair exchanged ideas on administration and that the Thai premier explained the latest developments on Thai politics and the potential of the Thai economy.

The UK is the largest EU exporter to Thailand (although Germany is the biggest EU investor) – key UK investors include: Tesco, Boots, BG, Standard Chartered Bank, Reckitt Benkiser, Rolls Royce and Triumph motorbikes
Thai exports to the UK (2010) were worth £2.2bn; UK exports to Thailand in the same year were valued at £1.2bn.

There are opportunities for UK companies in Thailand across a wide range of sectors including agri-technology, aerospace and automotive, education & training, energy, environment, retail, transport and life sciences.

Thailand is a mature, lower middle income economy with a good infrastructure, a skilled workforce and a business friendly environment. UK companies are increasingly looking to Thailand not only as a thriving market in its own right, but also as a regional base for doing business more widely with ASEAN.

There are over 600 members of the British Chamber of Commerce Thailand (BCCT). The Chamber plays an important role in supporting UK commercial interests in Thailand
UK trade in goods with Thailand 2005-2009 (£ million)

The UK has a significant presence in Thailand, particularly in the aerospace, automotive and engineering sectors. Other British investors include Boots and Tesco, who have invested £400 million and £1.5 billion respectively over the past ten years establishing their largest operations outside the UK; Standard Chartered Bank, and BG, which is the biggest UK investor in the Energy Sector.

Terrorism in Thailand: the Swedish connection