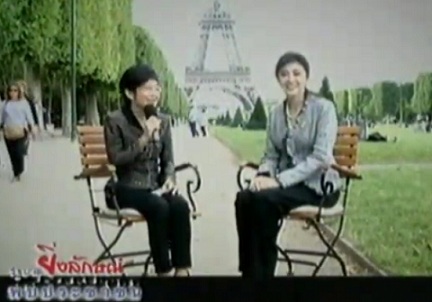 Prime Minister Yingluck Shinawatra on Saturday said her European trip, which took her to Germany and France was considered good timing to show Thailand’s concern as European countries weathered an economic crisis while also building confidence in Thai democracy and economy.

Ms Yingluck hosted her weekly “Yingluck Government Meets the People” TV and radio programme from Paris, and said that she had received warm welcome from Germany and France.

During the visit to Germany, the premier said, she has briefed German Chancellor Angela Merkel about investment opportunities and democracy in Thailand.

This was a good opportunity for Thailand to build confidence in the Thai economy, said Ms Yingluck.

Green economy and alternative energy were also on the agenda, she said, adding that Germany would sent technical experts to help Thailand in terms of quality of products, which would eventually help grow the volume of Thai export to Europe.

As for the visit to France, she said that France was outstanding in terms of fashion, while Thai textiles were considered a good quality product, so more cooperation should be sought in the future.

The global challenge of youth unemployment

Thailand to negotiate with EU on GSP