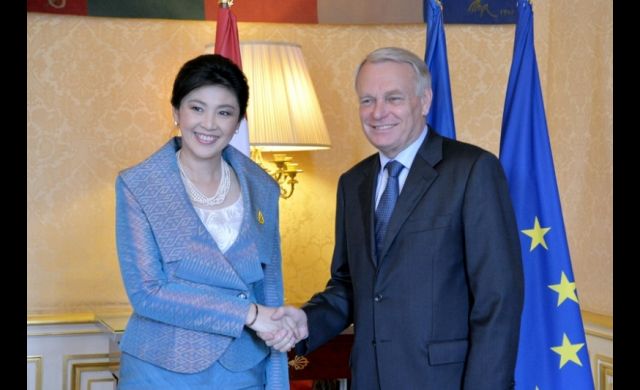 The Thai foreign ministry’s statement said Mr Ayrault, accompanied by his spouse Madame Brigitte Ayrault, will pay a two-day official visit February 4-5, as the first visit by a high level representative of France to the kingdom in seven years. The last visit was that of former French President Jacques Chirac as a Royal Guest of His Majesty King Bhumibol Adulyadej in 2006.

The statement said the past and upcoming visits underscore the commitment of both countries to boosting the Strategic Partnership between the two countries initiated in 2004.

It is also an opportunity to add another chapter in the long history of Thai-French relations which began with the reciprocal dispatch of embassies in the 17th century. Mr Ayrault will meet with Ms Yingluck on February 5, focusing on expanding trade and investment opportunities between the two countries, as well as increasing cooperation in varied fields including developing basic infrastructure, education and research and alternative energy.

The two leaders will also discuss regional and global issues of common interest and concern, including the continued prosperity and stability of Southeast Asia, based on a competitive ASEAN Community and a more connected Mekong and wider Asia-Pacific regions as well as developments in Europe and the European Union.

The French premier is expected to speak on relations between Thailand and the French Republic at Thammasat University. He will also preside over the inauguration of the Franco-Thai Business Forum and then meet the French community in Thailand. MCOT online news

via French PM to visit Thailand next month | MCOT.net.