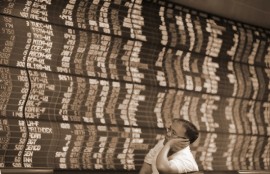 “The rise in the Stock exchange of Thailand Index reflected investors’ confidence there would be no violence,” said Thanachart Securities executive vice president Pichai Lertsupongkit.

The SET Index yesterday traded between 714.89 and 723.63 points with volume of Bt19.7 billion, led by the energy, banking and petrochemical sectors.

Tisco Securities reiterated in a recent report on market sentiment that a clearer picture on the political situation would emerge next week.

“Good news would be a time to sell and bad news a time to buy,” Tisco Securities said, adding that “good news” meant a partial seizure of Thaksin&apos;s assets and “bad news” a total seizure.

If it is “good news”, the SET Index will climb to test the resistance level at 732 points, which would be a good time to sell.

On the other hand, the “bad news” scenario could cause the SET Index to test the lowest point at 665, which would be a good time to buy, Tisco said.

via Investors positive on Court ruling.

Economic recovery should Continue if no political violence

While China’s biggest corporates are increasingly flexing their global muscle as the country’s economic and geopolitical influence accelerates, Bangkok is the 10th most popular destination for mainland firms expanding overseas. END_OF_DOCUMENT_TOKEN_TO_BE_REPLACED

With its strategic location in the center of ASEAN with emerging markets, including Cambodia, Laos, Myanmar, Malaysia and southern China, on its border, Thailand is well position to connect investors to new opportunities arising from the increasing border trade and the region’s rapid economic growth.
END_OF_DOCUMENT_TOKEN_TO_BE_REPLACED

Twenty years ago, day trading was the great new pastime for Americans, all of them tuned to the financial news and reports on the day’s newest crop of IPOs. END_OF_DOCUMENT_TOKEN_TO_BE_REPLACED