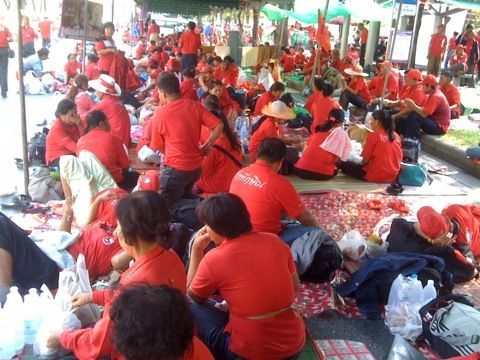 Red-shirt protesters, at least 100,000 strong, occupied Rajdamnoen Avenue Saturday and more kept flowing into the capital from all over the Kingdom Saturday night.

See the original post here:
Rajdamnoen a sea of red as protesters set up camp

So far Thailand has been hard hit by flagging global demand, particularly in the US and Europe. Exports fell 15.7% year on year in December, the second consecutive month of declining growth, according to Bank of Thailand statistics. The Ministry of Finance’s Fiscal Policy Office meanwhile projected the Thai economy contracted a worse-than-expected 3.5% in the fourth quarter. Independent analysts have carried forward that downbeat analysis, predicting economic and export growth will both be negative territory in 2009.Thailand’s shipments span the value-added gamut, with the country serving as a production and export hub for multinational automobile manufacturers, while maintaining its traditional position as one of the world’s leading rice, rubber and seafood exporters.

Lower provisioning requirements for nonperforming loan (NPL) stocks and impressive year-on-year loan growth, which was up 11% for the entire sector, drove those countercyclical gains. While extending new credits, the Thai financial system’s overall NPL rate fell from 9% of total outstanding loans in 2007 to 7% at the end of last year. Meanwhile Thai banks’ Tier 1 capital and capital adequacy ratios (the ratio of capital to risk-weighted assets) are now strong by international standards at 11% and 14% respectively.
It seems likely in the deteriorating global and local economic environment that Thai banks will relinquish some of those recent balance sheet gains. Analysts point to two particular areas of potential volatility, which if aggravated in the year ahead could raise questions about possible systemic risk: the first entails state-owned Krung Thai Bank’s low 40% loan loss coverage ratio for its NPLs; the other Thai Military Bank’s stubbornly high 16.4% NPL ratio.

New Prime Minister Abhisit Vejjajiva’s government has responded to the crisis with vigorous fiscal pump priming, including direct cash injections into the grass roots economy. With public debt at 23% of GDP, international reserves at US$110 billion, and 2008 balanced budget, the government arguably has plenty of fiscal room to maneuver.
In January the Cabinet approved a 117 billion baht supplementary budget, which included various measures aimed at buoying the economy, including cash 2,000 baht handouts to nine million civil servants and workers nationwide, job creation programs and community investment funds.

Rajdamnoen a sea of red as protesters set up camp

Despite all the new government’s fiscal efforts, the mounting economic slowdown is still expected to take a heavy human toll. Local newspapers carry near daily announcements of major new industrial and service sector layoffs, with sub-contracted labor so far being the hardest hit.
The Ministry of Industry predicted in January that 40,000 auto parts makers are at risk of losing their jobs as car assembly production has fallen off sharply. The Electrical and Electronics Institute meanwhile estimated that 30,000 workers would likely lose their jobs this year, on top of the 30,000 who were laid off from the third quarter of 2008.

It’s business as usual for offices in Bangkok

Some Events cancelled in Bangkok, but normal bank operations continue

While China’s biggest corporates are increasingly flexing their global muscle as the country’s economic and geopolitical influence accelerates, Bangkok is the 10th most popular destination for mainland firms expanding overseas. END_OF_DOCUMENT_TOKEN_TO_BE_REPLACED

With its strategic location in the center of ASEAN with emerging markets, including Cambodia, Laos, Myanmar, Malaysia and southern China, on its border, Thailand is well position to connect investors to new opportunities arising from the increasing border trade and the region’s rapid economic growth.
END_OF_DOCUMENT_TOKEN_TO_BE_REPLACED