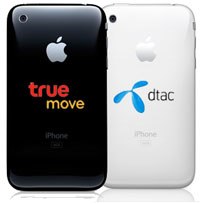 Total Access Communication (DTAC) plans to become the top iPhone seller in 12 months after its kick-off event this past weekend at Siam Paragon saw sales of 1,897 units, almost double the target.

Will Thailand ever get serious about 3G ?

It has deployed all its telecom services – from cellular to wireless Internet and digital content, including its 3G wireless broadband network – to support iPhone sales.

For example, the S package costs Bt449 a month for 225 minutes of voice calls, 200 SMSs, 30 MMSs and 100 megabytes of data calls. Users will receive a free bonus of three months after nine months.

via DTAC aims at top|spot for iPhone sales.

Bourse and baht gain further despite protests on investors’ confidence

It’s business as usual for offices in Bangkok

While China’s biggest corporates are increasingly flexing their global muscle as the country’s economic and geopolitical influence accelerates, Bangkok is the 10th most popular destination for mainland firms expanding overseas. END_OF_DOCUMENT_TOKEN_TO_BE_REPLACED

With its strategic location in the center of ASEAN with emerging markets, including Cambodia, Laos, Myanmar, Malaysia and southern China, on its border, Thailand is well position to connect investors to new opportunities arising from the increasing border trade and the region’s rapid economic growth.
END_OF_DOCUMENT_TOKEN_TO_BE_REPLACED

Twenty years ago, day trading was the great new pastime for Americans, all of them tuned to the financial news and reports on the day’s newest crop of IPOs. END_OF_DOCUMENT_TOKEN_TO_BE_REPLACED