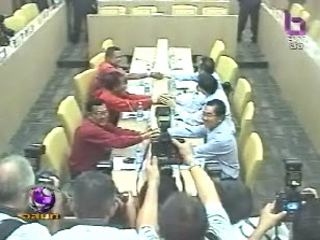 Prime Minister Abhisit Vejjajiva and the core leaders of the anti-government Red Shirt United Front for Democracy against Dictatorship UDD movement ended  their landmark negotiations Sunday evening without any concrete solution to the countrys current political crisis with both sides refusing to back down on their positions.

Beginning about 4.30pm, the negotiation was an an attempt by both sides toease rising tensions after the two-week protest turned into an increasingly tense confrontation between security forces and the red-clad protesters.

Online ad spending expected to increase more than 30 per cent

While China’s biggest corporates are increasingly flexing their global muscle as the country’s economic and geopolitical influence accelerates, Bangkok is the 10th most popular destination for mainland firms expanding overseas. END_OF_DOCUMENT_TOKEN_TO_BE_REPLACED

With its strategic location in the center of ASEAN with emerging markets, including Cambodia, Laos, Myanmar, Malaysia and southern China, on its border, Thailand is well position to connect investors to new opportunities arising from the increasing border trade and the region’s rapid economic growth.
END_OF_DOCUMENT_TOKEN_TO_BE_REPLACED