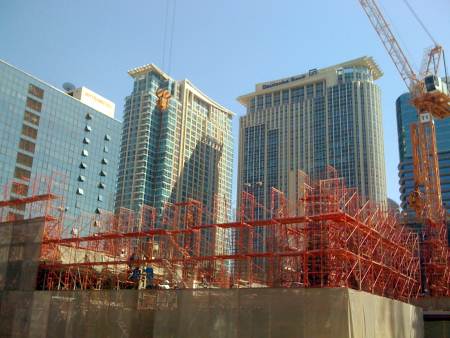 The real-estate industry is continuing its growth momentum, as developers have maintained their investment plans despite the political hiccups, according to the Bank of Thailand.

After meeting with seven developers yesterday for a discussion on industry trends as well as political impacts, the central bank concluded that there was yet no sign of an asset bubble. The real-estate industry now generates 5 per cent of gross domestic product.

Bank of Thailand Deputy Governor Bandid Nijathaworn said after the meeting that the industry enjoys continued expansion in line with the overall economy.

Last year, supply and demand both expanded by 9 per cent, thanks to the global economic recovery, tax incentives and commercial banks heavy lending activities. Still, as industrial growth is gradual, there is no sign of a bubble.

Despite the political unrest, no developer has revised its investment plan, but it is difficult to estimate the demand side

Despite the political unrest, no developer has revised its investment plan, but it is difficult to estimate the demand side, he said. However, demand is mostly driven by the economy&apos;s direction.

100% Made in Thailand Bullet Proof Vest

While China’s biggest corporates are increasingly flexing their global muscle as the country’s economic and geopolitical influence accelerates, Bangkok is the 10th most popular destination for mainland firms expanding overseas. END_OF_DOCUMENT_TOKEN_TO_BE_REPLACED

With its strategic location in the center of ASEAN with emerging markets, including Cambodia, Laos, Myanmar, Malaysia and southern China, on its border, Thailand is well position to connect investors to new opportunities arising from the increasing border trade and the region’s rapid economic growth.
END_OF_DOCUMENT_TOKEN_TO_BE_REPLACED

Twenty years ago, day trading was the great new pastime for Americans, all of them tuned to the financial news and reports on the day’s newest crop of IPOs. END_OF_DOCUMENT_TOKEN_TO_BE_REPLACED