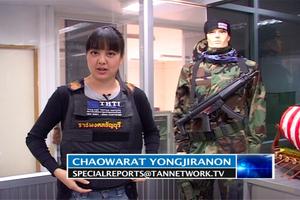 Thailand’s military like those of many developing countries spend millions on imported military equipment such as soft bulletproof vests, but now local researchers have found a way to cut costs by creating a vest made 100% from materials in Thailand.

Our reporter Chaowarat Yongjiranon went see if the vests truly protect the job of protecting the kingdom’s forces.

Over the years violence caused by the southern insurgency and political tensions in Thailand have brought much concern on how well protected Thai soldiers are. Despite the long presence of violence it is a sad fact that the country’s forces are not fully protected.

Going on a trip to Thailand ? You don't need to bring your bullet proof vest

For instance, only 20% of the troops assuring security for Bangkokians during the past Red Shirt protests have standardized bulletproof vests.

This is exactly what Professor Somprasong Parsapratet wants to change. With the financial support of the Thai Textile Association, he has over the past seven years developed the first soft bullet proof vest that does not rely on imported materials, but those found in Thailand.

Although it weighs as much as five kilograms and is not as strong as the standardized international brands, Somprasong says the design is what makes the Thai brand unique.

“Our fiber is not strong as them, but we can use the suitable structure of fabric to cover or to add the property or the quality of the vest.”

The vests are at the strength level of 3A, the highest for soft bulletproof vests, which can protect a solider from any handheld pistol. Somprasong personally runs various tests for each vest prepared for the army to take care that every life wearing his vest is protected.

Property sector continues growth according to the Bank of Thailand

While China’s biggest corporates are increasingly flexing their global muscle as the country’s economic and geopolitical influence accelerates, Bangkok is the 10th most popular destination for mainland firms expanding overseas. END_OF_DOCUMENT_TOKEN_TO_BE_REPLACED

With its strategic location in the center of ASEAN with emerging markets, including Cambodia, Laos, Myanmar, Malaysia and southern China, on its border, Thailand is well position to connect investors to new opportunities arising from the increasing border trade and the region’s rapid economic growth.
END_OF_DOCUMENT_TOKEN_TO_BE_REPLACED