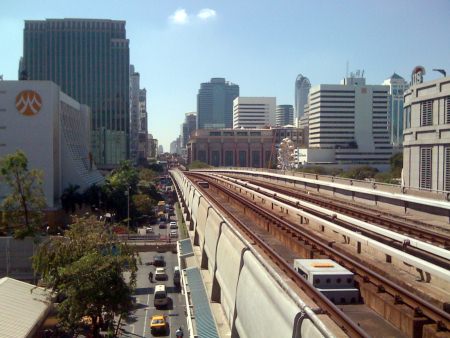 More than 3,000 new condominium along Thailand International Airport Rail Link line, worth over Bt30 billion, are slated for completion and transfer to owners by the end of the year.

Most developers launched residential projects to cater to demand for units in these areas over the past two years. The projects include the 547-unit The Complete Ratchapralop by Prinsiri, worth Bt1 billion; the 447-unit Ideo Verb Ratchapralop by Ananda Development, worth Bt1.5 billion; and the 329-unit Chiwathai Ratchapralop, worth Bt1.3 billion.

Asian Property Development&apos;s latest luxury condominium, the Address Asoke-Petchaburi, is worth Bt3.3 billion. This project has 574 units at a starting price Bt5.23 million each.

TCC Capital Land, a joint venture between Singapore-based CapitaLand Group and TCC Land, which is owned by beverage tycoon Charoen Sirivadhanabhakdi, has introduced a condominium project, Villa Asoke, worth Bt3 billion. This project has 525 units at a starting price Bt2.99 million.

via Over Bt30bn condominiums planned along Airport Rail Link.

While China’s biggest corporates are increasingly flexing their global muscle as the country’s economic and geopolitical influence accelerates, Bangkok is the 10th most popular destination for mainland firms expanding overseas. END_OF_DOCUMENT_TOKEN_TO_BE_REPLACED

With its strategic location in the center of ASEAN with emerging markets, including Cambodia, Laos, Myanmar, Malaysia and southern China, on its border, Thailand is well position to connect investors to new opportunities arising from the increasing border trade and the region’s rapid economic growth.
END_OF_DOCUMENT_TOKEN_TO_BE_REPLACED

Twenty years ago, day trading was the great new pastime for Americans, all of them tuned to the financial news and reports on the day’s newest crop of IPOs. END_OF_DOCUMENT_TOKEN_TO_BE_REPLACED