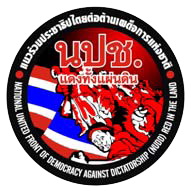 The United Front of Democracy Against Dictatorship (UDD) has responded rather positively with the proposal for national reconciliation presented by Prime Minister Abhisit Vejjajiva via a televised address.

Shortly after the televised address of the prime minister, UDD Deputy Chairperson, Jatuporn Prompan, on Monday night responded that the proposal is deemed a better solution than dispersing the crowd violently.

Mr Jatuporn however announced that the UDD would not reject or accept the proposal yet. On Tuesday, UDD core will meet to officially discuss and inform the prime minister of the group’s stance towards his national reconciliation road map.

Responding to queries of the media, the deputy chairperson stated that he personally wants everything to end before 5 May, as it marks Coronation day, an important day for Thai people to celebrate. He believed that the televised address of the prime minister should help improve the situation.

Meanwhile, UDD core leader, Suporn Attawong, commented that Mr Abhisit’s proposal is very good and would enable everything to resume to a state of normalcy.

Another UDD core leader, Jaran Ditapichai, regarded the proposal as a certain level of victory for the UDD, who was able to pressure the government to reduce the time frame for house dissolution. He said the UDD had always known that it would end this way as core leaders of both sides have been in contact.

Prime Minister Abhisit spoke in a televised address on Monday night that the government is ready to hold a fresh election within 14 November 2010.

via UDD responds rather positively with PM’s proposals : National News Bureau of Thailand.

Should Hong Kong be worried about Thailand’s ‘Red Shirts’?

While China’s biggest corporates are increasingly flexing their global muscle as the country’s economic and geopolitical influence accelerates, Bangkok is the 10th most popular destination for mainland firms expanding overseas. END_OF_DOCUMENT_TOKEN_TO_BE_REPLACED

With its strategic location in the center of ASEAN with emerging markets, including Cambodia, Laos, Myanmar, Malaysia and southern China, on its border, Thailand is well position to connect investors to new opportunities arising from the increasing border trade and the region’s rapid economic growth.
END_OF_DOCUMENT_TOKEN_TO_BE_REPLACED