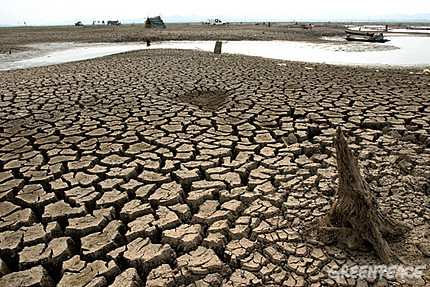 The prime minister has urged the Agriculture and Agricultural Cooperatives Ministry to come up with plans to tackle the ongoing drought, which is considered the worst in two decades. Prime Minister Abhisit Vejjajiva expressed his concern about the drought situation in Thailand, saying that it could be the worst in 20 years. He noted that the devastating drought and the severe lack of rain is believed to have been caused by the El Niño effect.

The premier acknowledged the need for more prudent management of water resources and said that he has assigned the Agriculture and Agricultural Cooperatives Ministry to advise farmers to postpone in-season rice cultivation and to discuss with them when the most appropriate time for farming will be.

Despite expectations that rainfall would normalize from July onward, Abhisit stressed that the government must continue to manage water resources effectively and ensure that water stored in the country&apos;s major reservoirs like Sirikit and Bhumibol is sufficient.

He also entrusted the ministry with planning measures to battle the dry spell and to aid the drought-stricken agricultural sector.

The prime minister expects a proposal from the ministry in a week or two.

Thai officials said Friday disaster areas have been declared in 53 provinces due to water shortages brought on by a severe drought. The Interior Ministry’s Disaster Prevention and Mitigation Department said a total 1,755,100 households, or 6,482,602 people, have been affected by the extreme dry season, the Bangkok Post reported Friday.

Rice production in Thailand and Vietnam, the two largest exporters, may be hurt by dry weather that has parched farms and cut water levels along the Mekong River, the Food and Agriculture Organization said April 7. The Thai harvest of second-crop rice that began in April, accounting for about 25 percent of annual output, may drop to 7 million tons from 8.4 million last year, Concepcion Calpe, a senior economist at the United Nations’ agency, said April 7. Output from Vietnam’s end-of-year harvest “may be affected,” Calpe said.

The drought has also caused damage to 58,300 acres of farmland in the 53 provinces, officials said. The officials said rescue workers with the department have distributed 20.6 million gallons of water in the area and performed installations, repairs and upkeep on 3,645 weirs, 3,985 reservoirs and 689 water pumps.

According to experts, drought in 2010 in Thailand is expected to be severer when compared with the previous years. Water shortages resulting from global warming is expected to seriously affect citizens, especially farmers nationwide, whose survival depends on their harvest and water supply.

This year’s dry season is expected to begin from 1 March until May 2010 but may last longer following late rain resulting from the El Niño phenomenon. Water supply management for the whole country is therefore crucial to ensure a sufficient amount of water throughout the upcoming drought.

Speaking in an exclusive interview with NNT, Project Management Office Director of the Irrigation Department, Dr Somkiat Prajamwong, said the upper north of Thailand seemed to receive the most serious effects from drought this year while the northeastern part was also in concern. He therefore suggested everyone help reserve water as much as possible.  Dr Somkiat also urged the nation to consume water economically and wisely while farmers should refrain from planting second rice crops due to the limited water supply. He hence suggested farmers to grow other kinds of crops requiring less amounts of water instead. He expected that farmers might be able to continue their rice cultivation again in May, but only with the presence of rainfall.